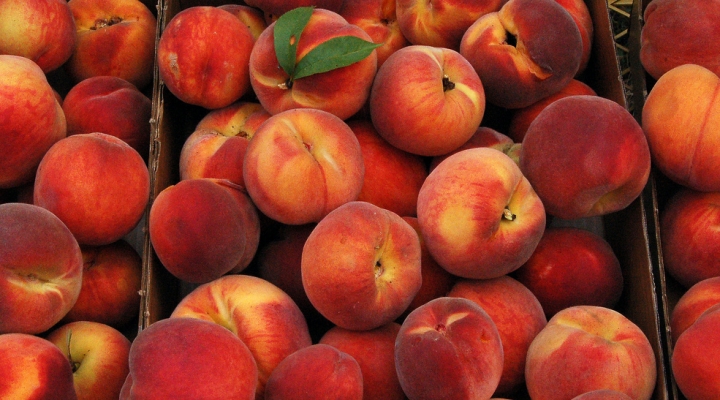 Researchers found that leaving the fruit unbagged in an organic orchard produced a 20 percent yield. Adding the bags increased the yields 10-15 percent, and spraying the fruit before bagging added another 35 percent in yield. In addition, yields were higher in the organic orchard than the conventional orchard. (artfulblogger, Flickr/Creative Commons)

But when the trials, funded by a Southern Sustainable Agriculture Research & Education grant, showed that the technique protects the fruit from devastating brown rot, marauding insects like plum curculio, and even hungry birds, producers and backyard growers started paying attention.

In the On-Farm Research Grant (OS16-094), “Fruit Bagging as a Strategy to Reduce Reliance on Pesticides for the Production of Peaches in the Southeast,” researchers found that bagging peaches between petal fall and harvest reduces pesticide use, while increasing yields (especially in organic production) and maintaining that juicy, sweet flavor customers have grown to love.

“We’ve gotten a lot of positive responses from farmers all over the country as a result of the research study,” said Melgar. “They want to know if they can get some of the bags. We’ve had requests anywhere from 100 to 60,000 bags.” Farmers can get bags from Clemson University along with instructions on how the properly use them.

Fruit bagging for protection is a common strategy in Asia. Farmers there use white bags, orange bags, and double layer bags (a brown outside bag with a white inside bag). With South Carolina ranked second in the nation behind California in peach production with 77,000 tons, researchers at Clemson felt that applying the technique to orchards was a worthwhile endeavor because peach growers in the southeastern U.S. face very high pest and disease pressures.

The project compared bagged vs nonbagged peaches in a conventional orchard and an organic orchard in South Carolina. Researchers played around with bag types: different types of paper bags, including sandwich bags, even nude stockings. Their bag of choice was a white bag, with a waxy coating outer layer, complete with a twist to tie the bag to the tree and a tiny slit in the bottom of the bag to keep the inside moisture-free.

“You put the bags on about three weeks after the petals fall, around the time the fruit is golfball size,” said graduate student Jaine Allran. “If you put the bags on too soon, the small fruit may fall off and you are just wasting the bags.” She also recommends that farmers spray the fruit to give it added protection before tying the bags on.  The bags then stay on the fruit until harvest.

Researchers found that leaving the fruit unbagged in an organic orchard produced a 20 percent yield. Adding the bags increased the yields 10-15 percent, and spraying the fruit before bagging added another 35 percent in yield. In addition, yields were higher in the organic orchard than the conventional orchard.

“We noticed that the fruit looks slightly paler than an unbagged peach, but this did not seem to be a problem for surveyed potential consumers where they knew these peaches were protected from pest, diseases and pesticides,” said Allran.

The successful results of the study have prompted the researchers to look at the strategy further for backyard and hobby farmers who may only have a couple of trees and want to sell their bounty at a local farmers market.

On the Clemson University Musser Fruit Research Farm, Melgar, Allran and graduate student Amanda Accampo are comparing non-bagged peaches, bagged peaches without any previous chemical application, and bagged peaches with different garden safe products that homeowners can purchase in local stores. Homeowners can improve the yield for their backyard trees by around 30 to 40 percent if bags are used. Adding a pre-bagging chemical can help obtain the upper limit of that range.

“We conducted a local survey asking customers how much more they’d pay for bagged peaches, and the average was 38 cents more per pound. Some customers were willing to pay as much as $1 more to buy fruit that hadn’t been sprayed with chemicals,” said Melgar.

One drawback to bagging fruit is the labor involved, said Melgar, but the upside in organic production is the increase in marketable yields.

Melgar is taking the research to a regional level with a newly acquired $1 million USDA-NIFA grant, applying the technique to more orchards in South Carolina, Georgia and Florida.

Don’t have peaches? Researchers say bagging works on other fruit trees, like plums, apples, and pears.

–Southern Region of the Sustainable Agriculture Research and Education Program