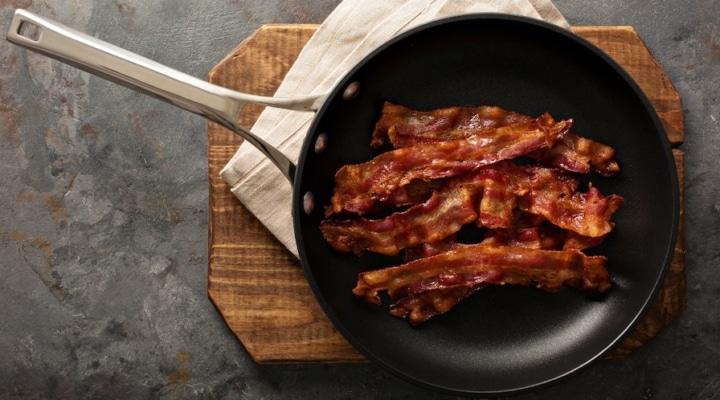 COLLEGE STATION, Texas — National Bacon Day is  Dec. 30, but many Americans celebrate this tasty slice of life most days and in more ways than ever before.

The National Pork Board reported U.S. consumption of bacon increased 2.4% from 2001-2013, with Americans consuming about 1.1 billion servings of bacon annually.

Pork belly, the cut of meat that produces bacon, is found on 8.7% of U.S. menus, a 59% increase in the number of restaurants serving products from the cut since 2014. Bacon is served in seven out of 10 U.S. restaurants.

The board’s report also indicates bacon’s increased demand over the last few decades is due to its growing appeal beyond breakfast. Today, bacon can be found on, in or wrapped around everything from other meats like filet mignon to treats like ice cream.

Riley has witnessed the shift at the center’s retail store, which offers a variety of meats including bacon, filet mignon, spare ribs and lamb chops — all mostly produced within the university’s animal science department.

“We historically supply the retail store with bacon products based on harvests, which remain the same year after year,” he said. “But now I have to buy pork bellies to supplement our supply in order to have bacon year-round.”

“Bacon is pretty darn good,” he said. “It’s amazing what pork bellies have done in the last several years. They’ve outpaced every other pork product and become the most valuable cut. Even when we see rises in belly prices, the public takes it in stride because they want their bacon.”

Sliced bacon prices have been relatively stable since 2017, he said. In November, sliced bacon was $5.50 per pound nationally, according to the U.S. Department of Agriculture retail reports.  It was $5.79 per pound in November 2018 and $5.70 per pound at the same time in 2017.

Concerns that China’s demand for pork could cause a bacon shortage as that nation deals with African swine flu and major losses to their herd are likely more hype than reality, Griffin said. U.S. pork production and pork belly cold storage levels are at all-time highs, and two new pork production facilities opened in 2019.

But higher bacon prices are not out of the question, he said. Pork bellies are the most in-demand cuts, and market pressures on pork carcasses could affect their value.

“It’s interesting that pork bellies didn’t register that high on the list of cuts for so long, and now bacon is king,” he said. “It is hands down the top pork product.”