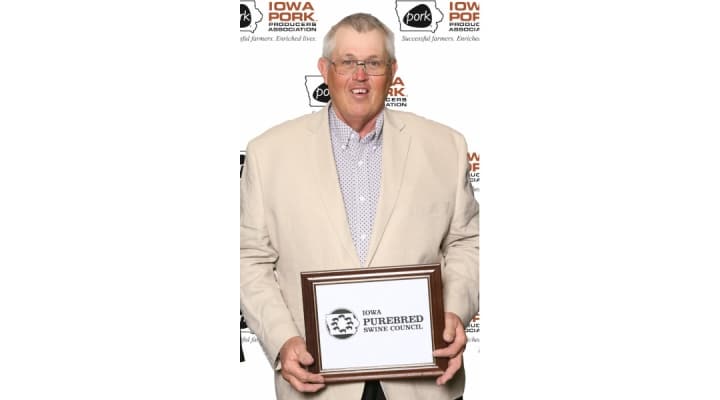 CLIVE, Iowa — A third-generation farmer from Ringgold County is the 2021 Master Seedstock Producer.

Kevin Triggs of Triggs Show Pigs was tapped for the award by the Iowa Purebred Swine Council (IPSC). The announcement of the Mount Ayr man’s award came during the 2022 Iowa Pork Congress awards banquet held in Des Moines in late January.

The award recognizes outstanding purebred seedstock producers who exemplify integrity, leadership and success in the production and promotion of the purebred swine industry.

Triggs, who follows in the footsteps of his grandfather, J.W. Triggs, and father, Marvin Triggs, has further developed the seedstock business to include the fourth generation of the family – Triggs sons Johnathan and Tyler.

Triggs Show Pigs recently expanded the Spotted breed that J.W. began with in 1918 to include Chester White, Duroc, and crossbreds.

They have about 70 sows for producing high-quality show pigs, to compete across the country; some are kept for breeding stock. They also run The Boar Battery, which markets semen from seven to nine Spotted and Chester White sires.

And youth showing an animal from Triggs Show Pigs also took home hardware in 2021, include both Reserve Chester White Gilt and Barrow at the Iowa State Fair; the Champion and Reserve Spotted Gilts and the Wisconsin State Fair, and the Reserve Duroc Gilt at the Missouri State Fair.

That’s only a brief listing of their success as swine seedstock producers. Their hogs are sold via online auctions, live sales, and on-farm visits. Triggs credits his sons for keeping up with evolving technology for sales of their animals.

Triggs is a member and past president of the Iowa Spotted Association, and served on the board for several years. He belongs to the Certified Pedigreed Swine and National Swine Registry organizations. Outside of pigs, he is a longtime 4-H club leader; Masonic Lodge member, and recently retired as longtime vice president of the Ringgold County Fair Board.