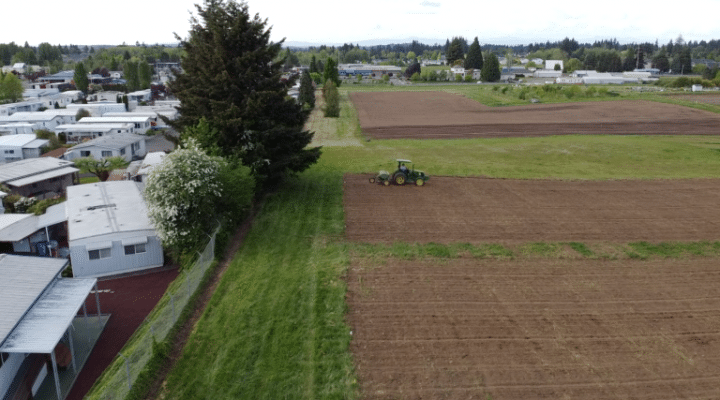 PULLMAN, Wash. — From unpredictable weather to invasive species, farming comes with many challenges. Running a farm adjacent to an urban center adds another layer of difficulty. “Farming on the Urban Edge,” a docuseries directed by Washington State University Extension faculty member Justin O’Dea, portrays the complexities of farming near residential communities ranging from Washington’s Skagit County to Multnomah County in Oregon.

California’s Ag and Art Film Festival and the Oregon Documentary Film Festival accepted the five-part project, and the docuseries’ first episode was a finalist for the Oregon festival’s “Best Series Episode Award.”

Funded by USDA-NIFA’s Western Sustainable Agriculture Research and Education program, the docuseries is a creation of the Peri-Urban Agriculture Network, a joint project of WSU Extension, the WSU Food Systems Program, and Oregon State University Extension. O’Dea is a regional agricultural specialist in southwest Washington who provides Extension programs to farmers across Clark, Cowlitz, and Skamania counties.

Peri-urban agriculture includes farms near cities that compete for land, water, energy, and labor, resources that can also be used to satisfy the requirements of the urban population. Farms in these geographical transition areas often face viability challenges related to land-use pressures and complex governance issues.

“Peri-urban agriculture is frequently underrecognized and underrepresented because it doesn’t exactly fit with commodity-scale agriculture or urban agriculture,” O’Dea said. “It often gets left out of grant-funded initiatives and lacks the collective support provided by commodity commissions or associations in commodity crop-producing regions.”

Yet peri-urban agriculture is key in connecting urban populations with food production, farmland stewardship, land-based livelihoods, and the importance of food security. It can also have high economic returns resulting from high-value crops and products, agritourism, and other business approaches that capitalize on urban markets, O’Dea said.

The docuseries, filmed in April and July 2021, was initially intended to help compensate for the lack of in-person interaction between growers at the inaugural “Farming on the Urban Edge” conference, which was conducted virtually because of the pandemic. The conference consisted of five monthly sessions from November 2021 to March 2022, each with a panel of farmers and organization representatives.

One docuseries episode was premiered at the beginning of each conference session to provide conversation fodder and establish the session’s topic.

“I was looking for a diverse range of perspectives,” said O’Dea. “In addition to farmers from historically underrepresented communities, I was also looking for diversity in farm size and type and what they produce, as well as stage of evolution in adapting their farm to the urbanizing context.”

Karen Lewis, tree fruit Extension specialist and director of WSU Extension’s Agriculture and Natural Resources Unit, was impressed with the project’s multi-prong approach. “It was a fully engaged methodology they used to not just address the challenges and concerns, but to also celebrate individuals and families trying to sustain farming operations in that area between urban and rural,” she said.

O’Dea was surprised by the number of similar experiences. “All farmers seemed to have issues with regulation and policy, no matter what political leanings they may have had or what their leanings were as far as how they managed their farms,” he said.

O’Dea wants the docuseries to help viewers understand the sector’s needs and inform actions taken when it comes to sustaining agriculture in urban-adjacent areas. He also hopes the project lets farmers learn from each other and understand they’re not alone in what they’re encountering.

Lewis sees the docuseries as an engaging opportunity for farmers to talk about their experiences. “If they don’t tell their story, no one is going to tell it for them,” she said. “Justin brought these farmers’ lives into our living rooms. That doesn’t happen very often.”