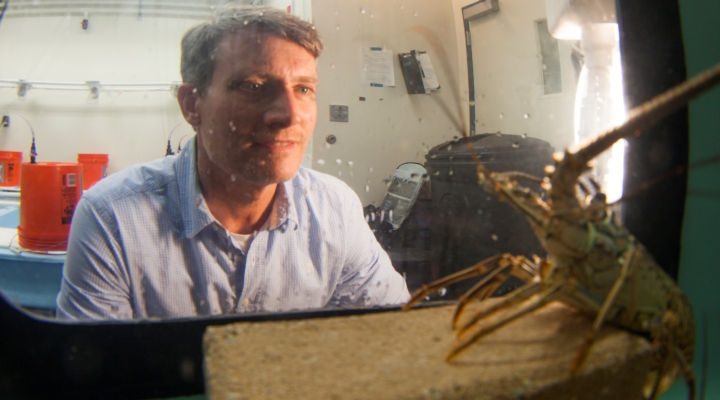 GAINESVILLE, Fla. — Ewww. You don’t want anyone coughing on you. It makes you recoil and cover your nose and mouth. Turns out, land animals and marine life also feel a sense of “gross” and use their own avoidance behaviors to survive and thrive, a University of Florida scientist says.

In a new article published in the journal Philosophical Transactions of the Royal Society B, Donald Behringer and one of his co-authors, post-doctoral researcher Jamie Bojko, both of the UF Institute of Food and Agricultural Sciences, point out many ways organisms try to escape diseases.

“In humans, a well-studied avoidance behavior is termed ‘the disgust response,’” said Behringer, associate professor in fisheries in aquatics at UF/IFAS. “This kind of response is physically displayed by most humans when they come into contact with vomit, rotten food, feces, ill people and other materials or organisms that have potential to spread disease. This response results in humans avoiding materials that are likely to harbor disease and thereby reduces their infection risk.”

“Disease avoidance behaviors are apt to be more common among aquatic animals than we realize, but because there are fundamental physical differences between terrestrial and aquatic environments, the difficulty lies in identifying these behaviors as they may not operate in ways that are obvious to us, as terrestrial animals,” Behringer said.

Behringer focuses much of his scientific work on the Caribbean spiny lobster. It’s the only lobster species with a natural viral disease – ‘Panulirus argus Virus 1’. He and colleagues have done a great deal of research to understand the virus, determining that infected lobsters waste away and die alone in their shelters.

“It’s like the lobster’s own version of the flu, but it can rarely recover,” Bojko said.

Several years ago, Behringer and his team discovered that the Caribbean spiny lobster can sense when one of its own kind is infected with a viral disease and they avoid it like the plague. As a result, the healthy lobster lowers its chance of contracting the virus, Behringer said.

Here’s another avoidance example: Scientists have seen some tiny shrimp-like creatures known as amphipods select mates that don’t have sexually transmitted diseases. Males can recognize when a female has a fungal infection, Bojko said. As a result, the male invests less sperm during their encounter with the infected female and spends less time with her.

Scientists and fisheries managers can learn from Behringer’s article more about how fish and crustaceans can avoid disease and stay healthy, and how these behaviors might be missing from farmed versions of these animals.

“Understanding how marine animals are capable of avoiding diseases gives us valuable information about how we could theoretically use such behaviors to lessen the effects of disease in our aquaculture systems,” Bojko said. “High commodity species, like salmon and American lobster, have diseases that could potentially be avoided if the animals were selected for such avoidance behaviors, assuming the behavior is innate and not learned.”

“If the natural ecology and behavior of aquaculture species were considered more explicitly in farming operations, the yield and quality of the product could potentially be much greater and meet the demand of an ever-growing human population, while reducing the need for artificial disease control mechanisms,” Behringer said.

Florida Orange Production Up in May Forecast
May 12, 2022