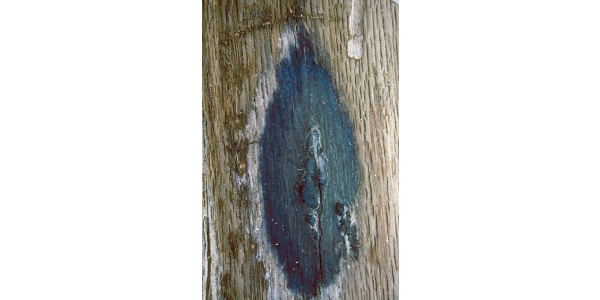 Scouting for fungal mats is important to do in early April and through the spring months. These mats will emit a fruity smell, and if the bark peels easily, look for blackened, raised, fluffy areas on the sapwood. (Photo courtesy of U.S. Forest Service)

AMES, Iowa — Pruning oak trees from April to July exposes them to a high risk of contracting oak wilt, a serious disease that can infect and kill a range of oak species.

Oak wilt is caused by the fungus Bretziella fagacearum (previously Ceratocystis fagacearum). When oaks are pruned or wounded during the spring and summer, the risk of transmission by beetle vectors that carry spores to newly wounded trees becomes very high.

As temperatures rise, beetles that transmit the fungus become active. Hot and rainy weather causes the fungus on already infected trees to form spores on fungal mats underneath the tree trunk’s bark. The beetles are attracted to the sweet odor that the fungus mats produce; they pick up the fungus and then transmit the disease as they are also attracted to the sap that oaks produce when pruned; so, any maintenance pruning should be stopped now until August.

Scouting for fungal mats is important to do in early April and through the spring months. Look for cracks in the bark of oak trees, which is a sign of a fungal mat growing. These mats will emit a fruity smell, and if the bark peels easily, look for blackened, raised, fluffy areas on the sapwood. Have a scouting guide handy, such as this free guide from the United States Forest Service.

If you are not sure, or are considering testing for oak wilt, the Plant and Insect Diagnostic Clinic at Iowa State University Extension and Outreach can help. Make sure to send good quality digital photos; review digital photography instructions and tips.

Red oaks are very susceptible to the oak wilt fungus and can die within four to six weeks. Fungal mats will only form on red oaks (pointy leaves). White and bur oak (lobed leaves) are moderately more tolerant, and therefore no fungal mats will be present. Refrain from pruning all oaks from April to August to keep your and your community oak trees healthy and strong.

Financial assistance for farmers and ranchers
May 26, 2020

No empty chairs at GAP, tree-pruning workshop
May 9, 2018