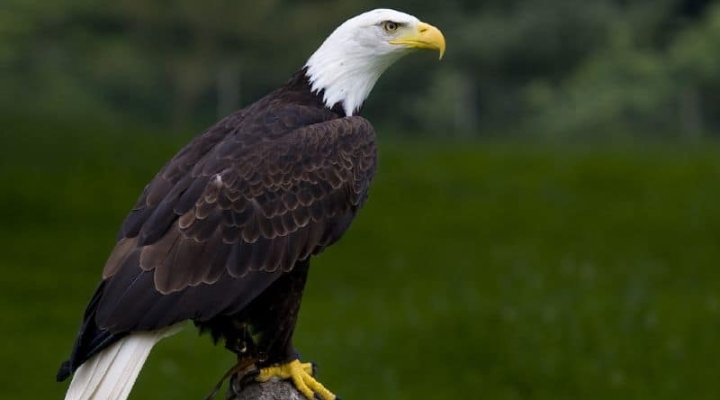 The viral disease called highly pathogenic avian influenza has been detected in bald eagles in Georgia and has likely undercut nesting success for eagles in the state’s coastal counties, according to the Georgia Department of Natural Resources. (photo by Brian Scott, creative commons/flickr.com)

SOCIAL CIRCLE, Ga. — The viral disease called highly pathogenic avian influenza has been detected in bald eagles in Georgia and has likely undercut nesting success for eagles in the state’s coastal counties, according to the Georgia Department of Natural Resources.

The viral disease called highly pathogenic avian influenza has been detected in bald eagles in Georgia and has likely undercut nesting success for eagles in the state’s coastal counties, according to the Georgia Department of Natural Resources.

Avian influenza or bird flu can infect wild and domestic birds, as well as other animals. The strain known as highly pathogenic avian influenza, commonly referred to as HPAI, is worldwide, highly infectious, untreatable and potentially lethal to infected animals. HPAI has been detected in wild birds in more than 30 states this year, the U.S. Agriculture Department reports. Those cases list 11 wild birds in Georgia, including lesser scaup, gadwall, American wigeon and now bald eagle.

The risk of HPAI being transmitted to people is low. To date, no human infections from the current virus (H5N1) have been documented in the U.S., according to the Centers for Disease Control and Prevention.

Samples from three bald eagles found dead, one each, in Chatham, Glynn and Liberty counties tested as suspected positive last month at the Southeastern Cooperative Wildlife Disease Study in Athens. Those results were recently confirmed as HPAI (H5N1 2.3.4.4b Eurasian strain) by the USDA National Veterinary Services Laboratories in Ames, Iowa. Other eagle carcasses are also being checked.

In Georgia’s six coastal counties, annual DNR aerial surveys of nesting bald eagles have revealed more failed nests –  those that did not fledge young – than expected. Some nests had dead eaglets. Others were missing young that usually would not have left the nest yet, according to survey leader Dr. Bob Sargent, a program manager with DNR’s Wildlife Conservation Section.

Citing preliminary findings, Sargent estimated that nest success along the coast this year is down about 30 percent. Although the 73 nests documented was normal, he said fewer than half fledged young, compared to an annual average success rate of 78 percent from 2015-2021.

About a third of the eagle nests in Georgia are in the coastal counties. HPAI is typically carried by waterfowl and shorebirds. Eagles could have contracted the virus by preying or scavenging on dead or sick waterbirds (ducks often gather in large rafts in coastal waters during winter). Dead bald eagles have been confirmed with HPAI in other Southeastern states, including Florida, South Carolina and North Carolina.

Sargent said the bald eagle population in Georgia is strong and he does not expect HPAI to significantly slow the species’ rebound. Initial survey results of eagle nesting outside the coastal region indicate a success rate on par with previous years. Full survey results are expected by late spring.

DNR is working with the Southeastern Cooperative Wildlife Disease Study and other agencies to investigate mortalities involving wild birds on the coast. Wildlife rehabilitators have been advised.

To help prevent the spread of HPAI, the public should avoid handling sick or dead birds (CDC recommendations for hunters and game birds), report dead or sick eagles to DNR at (478) 994-1438 and keep pets away from sick or dead birds. Symptoms of HPAI can vary from lethargy to tremors and seizures. However, live birds can be asymptomatic and dead ones may show no obvious signs of trauma.

The Georgia Department of Agriculture (https://agr.georgia.gov) provides guidance regarding commercial poultry operations and backyard flocks. Issues involving poultry should be promptly reported to the Georgia Avian Influenza Hotline, (770) 766-6850 or gapoultrylab.org/avian-influenza-hotline. For concerns about a potential human infection or exposure, please contact your public health department.

New cohort of Rural Scholars to join the university community