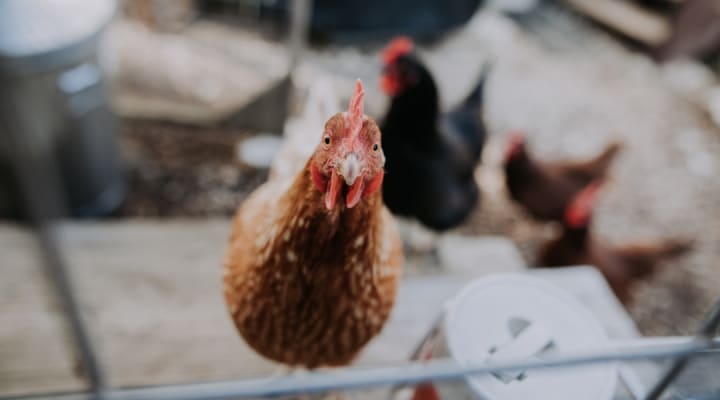 Backyard chicken producers should be vigilant with biosecurity measures to mitigate exposure to a highly pathogenic avian flu that has been detected in seven states so far. (Photo by Christin Hume on Unsplash)

COLLEGE STATION, Texas — Texas A&M AgriLife experts want commercial and backyard producers across the state to be aware of a growing number of highly pathogenic avian flu detections in the U.S.

On Feb. 14, the U.S. Department of Agriculture’s Animal and Plant Health Inspection Service, APHIS, confirmed the presence of highly pathogenic avian influenza in birds in two states – a flock of commercial broiler chickens in Fulton County, Kentucky, and a backyard flock of mixed-species birds in Fauquier County, Virginia. The avian flu pathogen has been detected in seven states, including Kentucky, Virginia, South Carolina, North Carolina, Florida, Indiana and Maryland.

APHIS is working closely with state animal health officials in Kentucky and Virginia on joint incident responses. State officials quarantined the affected premises, and birds on the properties will be depopulated to prevent the spread of the disease.

Those outbreaks followed an initial report regarding avian influenza in a turkey operation in Indiana on Feb. 9. Another incident of spread was reported at a separate turkey farm in Indiana on Feb. 16. The positive detection in Maryland was in wild waterfowl.

Avian flu no threat to humans, but poultry producers should be wary

“Commercial producers know the routine, and maybe they need to be a little more mindful of their activities and biosecurity protocols, but the backyard producer is a real concern because there is more risk in those flocks,” he said. “So, they need to be really careful about their activities and interactions around wild birds and quarantining new birds before they introduce them to the flock. They also need to report any sudden deaths to AgriLife Extension agents or contact the Texas Animal Health Commission directly.”

TAHC is monitoring the 2022 HPAI situation closely, and concentrating on working with other agencies to disseminate information about the disease and prevention methods now, before this avian flu gets any closer to Texas.

APHIS materials about biosecurity, including videos, checklists and a toolkit are available to help producers reduce the risk of infections in their flocks.

Hairgrove said some basic tips for backyard biosecurity include:

– Restricting visitors from houses and coops, especially without thorough disinfecting.

– Dedicating specific clothing and shoes or rubber boots for exclusive use in poultry houses.

– Washing and disinfecting any shared equipment such as scales, feeders and drinkers.

– Acquiring birds from sources where they have been tested for diseases.

Hairgrove said the positive test in waterfowl in Maryland should remind backyard producers to avoid contact with wild birds.

“Any type of handling of wild birds by producers or their children leaves the potential for spreading this disease to an at-home flock,” he said. “Introducing the pathogen on their clothes or shoes is also possible, so they really need to be careful and be strict about their biosecurity protocols, especially with this type of avian flu out there and the amount of bird movement this time of year.”

USDA and state authorities are well versed in exercises to contain avian flu and are working to contain it as they have done in previous years, said Kiril Dimitrov, DVM, Ph.D., assistant agency director for microbiology and research at TVMDL, Bryan-College Station.

Dimitrov said TVMDL has been performing testing as part of the Animal and Plant Health Inspection Service wild bird surveillance for avian influenza in the Mississippi and Central Flyways.

He said as Hairgrove mentioned, backyard flocks are very important, and flock owners need to stay updated on this subject and aware of biosecurity regimens on their premises.