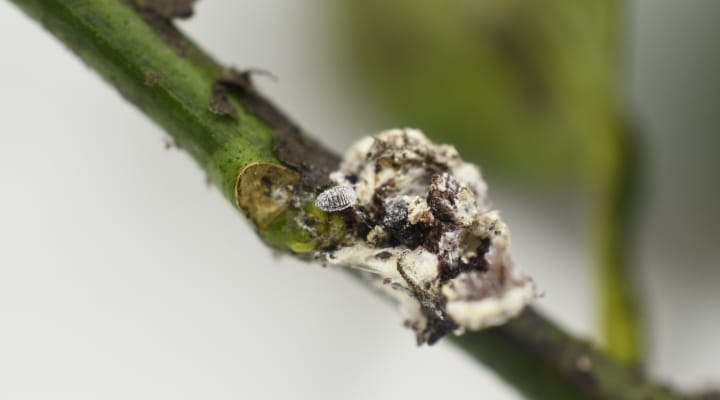 As a child in a Boston suburb, Nicole Quinn was oft outdoors. She marveled over trees, water and dirt -- and how everything was interdependent. She would turn over rocks to examine insects and worms as they worked in their habitats. (photos by Robin Koestoyo, UF/IFAS)

FORT PIERCE, Fla. — As a child in a Boston suburb, Nicole Quinn was oft outdoors. She marveled over trees, water and dirt — and how everything was interdependent. She would turn over rocks to examine insects and worms as they worked in their habitats.

So began a relentless curiosity about nature and the relationships between plants, animals and the environment. Quinn’s visits to the backyard, neighborhood forests and local ecosystems were routine throughout her elementary, middle and high school years.

“If you want to study ecology and behavior, insects are perfect. I am still amazed at how there is a specialized bug for every niche and environment,” Quinn said.

Quinn’s fascination with nature was the start of an education that led to a prominent career as a woman in science. Today, Quinn is a highly trained professional scientist with a doctorate from Virginia Tech and a master’s from Michigan State University, both in entomology. Her bachelor’s degree from Gettysburg College is in biology.

Quinn recently joined UF/IFAS as an assistant professor of entomology. She’ll specialize in the biocontrol of invasive insects and mites at the Norman C. Hayslip Biological Control Research and Containment Laboratory in Fort Pierce.

“Dr. Nicole Quinn is an exceptional entomologist, due to her expertise with classical biological control, parasitoids, novel research design techniques and teaching capabilities,” said Ronald D. Cave, director of the UF/IFAS Indian River Research and Education Center in Fort Pierce, where the Hayslip lab is located.

Quinn’s expertise is in studying and introducing an invasive species’ natural enemies from its native range to control it in a nonnative environment, where the species causes loss. Biocontrol agents studied at the lab have already been released into Florida’s environment to manage super-spreading plants that interfere with native vegetation, animals and human activities.

The UF containment laboratory is one of only two facilities in Florida where scientists lead biological control research in a quarantine setting. The facility is the final step to gaining federal approval to release new insect control agents into the state’s ranchlands, croplands and natural landscapes.

Quinn will begin her research with Nipaecoccus viridis, also known as the Lebbeck, spherical or hibiscus mealybug. In Florida, the insect causes fruit drop in citrus groves. The mealybug is a pest of citrus and other commodities in other parts of the world. Widespread in the Middle East and Africa, scientists have achieved biological control success against the pest with a parasitoid. Her program will enhance and contribute to existing efforts by UF/IFAS researchers with this species.

“In Jordan, an effective parasitoid of the mealybug was identified and subsequently released to control the mealybug. I hope that this parasitoid will be helpful in Florida,” Quinn said. “And I will do due diligence to ensure its safety prior to approval for introduction into Florida’s environment.”

Quinn demonstrated authority with parasitoids released for biological control of the emerald ash borer, Agrilus planipennis, a gem-colored invasive beetle responsible for the deaths of hundreds of thousands of native ash trees in 30 U.S. states and Canada.

“Ash tree populations declined precipitously — the landscape was altered. Animals and insects depend on the tree for habitat and food; the trees play an important role in nutrient and water cycling in forests. Ash trees were once used for construction and furniture, and now they are not due to significant ash mortality,” Quinn said.

As a postdoctoral researcher for the U.S. Department of Agriculture-Agricultural Research Service Beneficial Insect Introduction Research Unit and the University of Massachusetts, Quinn studied the effectiveness of the parasitoids released against the ash borer, their dispersal, cyclical changes and biology.

“What’s interesting about working on the biological control of a tree pest is that it takes a little longer to see the impact. After more than a decade of work on this insect by many scientists across North America, we are starting to see some positive impacts such as increased parasitoid detection and an increase in the number of new ash seedlings in some locations,” Quinn said.

“The long-term sustainability of a successful program is the payoff. Biological control can allow for sustainable, long-term, and cost-effective mitigation of invasive species impacts.”

Insect pests of alfalfa in the southeastern U.S.