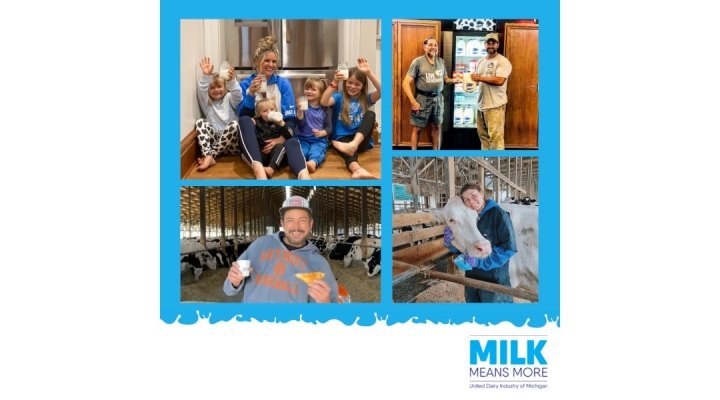 But it’s an immense job. To supplement what the United Dairy Industry of Michigan (UDIM) shares on their channels, they have partnered with social media influencers to help share dairy’s story. UDIM has developed relationships with athletes, farmers, health professionals, members of Generation Z and other influential individuals with social followers as part of this effort.

“Influencers provide insight into their followers that help us understand how to tell the story of dairy so it truly resonates with their supporters,” explains Sarah Woodside, UDIM Director of Communications. “They help us relate to specific audiences because they are those audiences. Plus, their creativity and passion are boundless.”

This spring, four dairy influencers offered advice and experiences about connecting with consumers. Alycia Burch, Glenn Packard, Kip Siegler and Stef Turner are diverse in background, experiences and target audience, but all have found influencer success as dairy advocates.

Here are four lessons from their experiences.

Authenticity and consistency are everything. Social followers appreciate and remain loyal to influencers who remain true to themselves while consistently delivering updated content.

“It’s a heck of a commitment to consistently put a video out every week,” says Siegler, who owns a dairy farm near Imlay City, Michigan, with his family and has followers from 32 countries. “But I think I’m making a change and teaching people about what we do and showing them the hard work and that we are the professionals of the industry. We’re the experts and they need to hear it from us.”

He adds, “Be yourself. Don’t try to fake it. Because after hours and hours, the true you is going to come out.”

Speak your truth. Don’t try to be everything to everyone. Instead, focus on your experiences and your learnings.

“I grew up in a farm community, so I was excited to partner with Milk Means More,” says Turner, a mom to four young daughters from Williamston, Michigan. “It’s important to me to share the dairy industry with my followers because it’s part of how I grew up. It’s part of how my husband grew up.

“I show my following how family-oriented farming is and the importance of dairy to my family,” she says.

Don’t talk at your followers. Listen to what they have to say so your message resonates.

“Be open-minded to the next generation,” says Emmy-nominated choreographer and filmmaker Packard. He grew up on his family’s dairy farm and now owns a dance company #theINstituteofDancers in Okemos, Michigan. His troupe uses dance to create music videos and social posts for UDIM. “We’re showing the nutritional value, what milk is and where it comes from. And we do it through something that they connect to, which is music and dance.”

“It’s a very different generation than what I’m used to,” he adds. “I have a diverse group of company members. I love to hear their stories, what their dreams are and where they came from. It’s so important to connect with your audience.”

Social media enables you to connect with people where they live – online. And they’re often visiting social media on mobile devices. In fact, most mobile phone users check their phones up to 63 times daily.[2]

“College students are always on their phones,” says Burch, a graduate student in dairy nutrition at Michigan State University. “This is just what this generation does, which means that they’re also on social media. They’re on Facebook and Instagram, and TikTok has exploded – everybody’s on it.”

“It’s a unique opportunity to use these platforms to reach college students and show them dairy is great for them,” she says.

These influencers and others also working to share dairy’s message in conjunction with UDIM have significantly and positively boosted dairy’s social presence.

“By our estimate, last year alone, influencers helped us create about 7.5 million impressions, or how many people we reach,” says Woodside. “They have a huge impact.”

About the United Dairy Industry of Michigan

Hurry! Today is the last day!