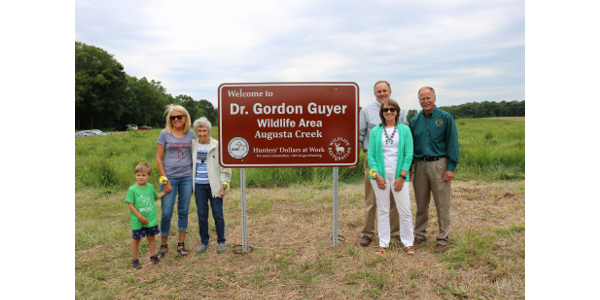 LANSING — The Michigan Department of Natural Resources rededicated the Augusta Creek State Wildlife Area in Kalamazoo County in honor of Gordon Guyer, a tireless advocate for Michigan’s natural resources who died last year at the age of 89.

Recently, the area was renamed the Dr. Gordon Guyer Augusta Creek State Wildlife Area as a tribute to Guyer, who served as the director of the DNR from 1986 to 1988 and was involved in the discussions and evaluation of dedicating the Augusta Creek State Fish and Wildlife Area. Guyer was raised in Augusta and was an enthusiastic hunter, angler and conservationist.

“Dr. Guyer was not just a mentor and a friend to me and many others, but he represented the best of Michigan’s conservation ethic and heritage,” said Keith Creagh, DNR director. “The legacy he left this state will continue for many years. Dedicating this wildlife area in his name is one small way of memorializing that lasting legacy so that future generations of Michigan citizens will know the positive mark Dr. Guyer left on our world-class natural resources.”

In addition to Creagh and other DNR employees, members of the Guyer family and other friends and partners attended the rededication ceremony and helped celebrate Guyer’s contributions. Pheasants were released on the wildlife area as part of the ceremony.

“Michigan’s natural resources, as well as the DNR, played such a key role in the life of my father, both recreationally and professionally, and additionally were truly the basis upon which our wonderful, fulfilling and complete father-son relationship was built, making this dedication and recognition so extra special,” said Dan Guyer, Gordon Guyer’s son. “This is a wonderful honor of my father to have this state game area here in the locale where he grew up, and in recognition of his contributions to, and passion for, this great state of Michigan.”

“With my father’s continual desire to support youth opportunities, hopefully this will be a location where young people can come and take part in some of the pleasures he enjoyed and – as was true for him – gain respect for Michigan’s great natural resources as well as positively influence their futures,” Dan Guyer added.

Guyer graduated from Michigan State University, receiving his bachelor’s degree, master’s degree and doctorate in entomology. He joined the MSU faculty in 1953 and held many leadership roles on campus. He was the director of MSU Extension from 1973 to 1985, vice president for Governmental Affairs, and MSU president from 1992 to 1993. He held director positions at the DNR, Michigan Department of Agriculture and the Kellogg Biological Station. Guyer traveled extensively for scientific research and led one of the first American scientific groups allowed to visit China in the mid-1970s. He later traveled to Africa under United Nations’ sponsorship to develop plant-protection education and research efforts in eight countries.