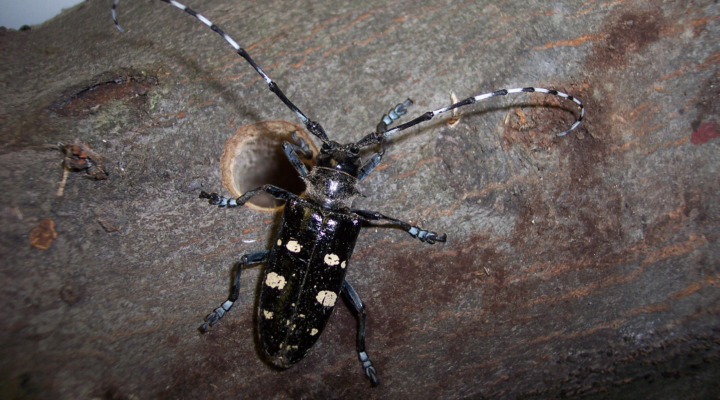 WASHINGTON — The U.S. Department of Agriculture’s Animal and Plant Health Inspection Service (APHIS) wants to remind the public that August is Tree Check Month. This is the best time to spot the round, drill-like holes made by the Asian longhorned beetle (ALB), a highly destructive invasive pest that destroys trees.

“If you love trees, now is the time to take 10 minutes and go outside and look for the signs of this invasive pest,” said Josie Ryan, APHIS’ national operations manager for the ALB eradication program. “Look for round holes the size of a dime or smaller in tree trunks and branches. If you see them or black beetles that have long antennas with black and white bands, report them immediately.”

The Asian longhorned beetle has the potential to destroy millions of acres of America’s treasured hardwoods, including maple, birch, elm, willow, ash and poplar trees. Unfortunately, there is currently no cure to save infested trees. They need to be removed to keep the beetle from spreading to nearby trees, as well as to protect homes and other personal property, since infested trees will die and can drop branches.

“Trees infested by the beetle weaken and die over time and are more likely to fall or lose branches during high winds and storms,” added Ryan. “Since we’re in hurricane season, it’s wise to remove trees sooner than later. It’s possible to get rid of this destructive pest, but we need the public’s help to do so. To date, the beetle has been eradicated from Illinois and New Jersey.”

The beetle is slow to spread on its own during the early stages of an infestation, so early detection and reporting is critical to containing it. People can also help by not moving firewood from areas quarantined because of the ALB, which can transport the beetle hidden inside to new locations.

The beetle has distinctive markings that are easy to recognize:

• Long antennae with black and white bands, longer than the insect’s body.
• A shiny, jet-black body, about 1” to 1 ½” long, with white spots.
• Six legs with possible bluish-colored feet.

Signs of infestation include:

• Round exit holes, about the size of a dime or smaller, in tree trunks and branches.
• Shallow oval or round scars in the bark, where the adult beetle has chewed an egg site.
• Sawdust-like material, called frass, on the ground around the tree or in the branches.
• Dead branches or limbs falling from an otherwise healthy-looking tree.

After seeing signs of the beetle:

• Make note of what was found and where. Take a photo, if possible.
• Try to capture the insect by placing it in a container and freezing it. Doing so will preserve it for easier identification.
• Report findings by calling 1-866-702-9938 or completing an online form at www.AsianLonghornedBeetle.com.

The ALB was first detected in the United States in Brooklyn, New York, in 1996. It is believed to have come from wooden packing material used in cargo shipments from China. Since then, it has led to the loss of more than 160,000 trees.

For more information about the Asian longhorned beetle, ways to keep it from spreading and eradication program activities, visit www.AsianLonghornedBeetle.com and www.HungryPests.com. For local inquiries or to be forwarded to your State Plant Health Director, call 1-866-702-9938.