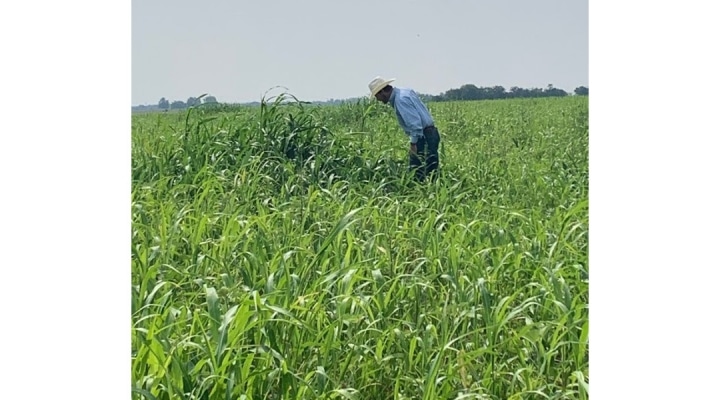 Make plans now to attend what is sure to be an outstanding event, “Summer Cover Crops to Support Winter Wheat,” 9 a.m. to 2 p.m., Aug. 31 in Garfield County. This two-stop demonstration is a joint effort of the Garfield County Conservation District, Oklahoma Conservation Commission and General Mills. (Courtesy Photo)

OKLAHOMA CITY — The previous steps taken in conservation practices were successful. The next steps are exciting. The Oklahoma Conservation Commission and partners have and will continue to be with you on this game changing journey.

The next step? Regenerative agriculture, a mindset and application change where farmers and ranchers reduce their reliance on conventional practices. Along this path, they will focus on restoring or regenerating the soil. The soil is the cornerstone of a healthy ecosystem and a productive farm or ranch.

The Oklahoma Conservation Commission has been recognized for their work in soil health by General Mills.  The Commission and their partners strive to keep producers first in education.  The Commission’s efforts include working with Conservation Districts to feed soil health education to local communities.  This partnership and success encouraged General Mills to help support their efforts by helping with cover crop cost for producers, as well as education, and support for local mentors.

Make plans now to attend what is sure to be an outstanding event, “Summer Cover Crops to Support Winter Wheat,” 9 a.m. to 2 p.m., Aug. 31 in Garfield County. This two-stop demonstration is a joint effort of the Garfield County Conservation District, Oklahoma Conservation Commission and General Mills.

The first stop features the Tim Heinrich Farm where cover crops have been used to support soil protection and enhanced grazing.  Join us for a discussion of planting after covers, grazing techniques and soil improvements.

The beginning location of the initial stop is 4 miles east of the intersection of Highways 74 and 15 and 1 mile north (Follow the markers to the location).

At the second stop, we will visit the Brian Grantz Farm where cover crops have been used as soil protection prior to fall wheat planting. Discussions will cover planting method do’s and don’ts.

The second stop is 5 miles south of the south end of Garber and 1.25 miles east on East Southgate Road. Lunch is provided, but please RSVP to Calvina with the Garfield County Conservation District, (580) 542-1288 by Aug. 25.

“The goal is to give producers as many resources as possible to help them fit their soil health needs,” Seiger said. “This is truly a volunteer-based project.  The producers will be local, the mentors will be local and the demo farms will be from within each of the Conservation Districts.”

The project will be working in Kay, Grant, Garfield, and Kingfisher counties.

The plan is to work with Conservation Districts to establish a demo farm in each. Each demo farm will be focused on cover crops and will be paid for through the districts on behalf of General Mills. Emmons will be working with the conservation districts to establish four mentor producers within the area of the project.  Those mentors will collectively seek 10 other new soil health producers and help them establish and understand soil health systems better.

Field days will be held at the demo farms in addition to potentially others field days in the those counties.

Emmons said, “We will be working with and through the Conservation Districts in those counties to find willing producers to become local mentors for producers that want to improve their land and operations through a soil health systems approach.”

He emphasized that the project will be providing education and resources to help producers understand how to improve water infiltration, water holding capacity, carbon storage, and better grazing systems to add profitability to their operations.

“We will provide mentors and educational courses to show how to get to the next level of understanding the system of soil function,” Emmons said.

Adding Emmons to the team in February was a significant boost for the program. The Leedey, Okla., producer is a former winner of the Leopold Conservation Award, a 2021 inductee of the Oklahoma Conservation Hall of Fame and has served as a Regional Director for USDA’s Farm Production and Conservation (FPAC) for the states of Oklahoma, Texas, New Mexico, Colorado and Kansa. On top of all that, Emmons has served as president of the Oklahoma Association of Conservation Districts; President to the National Young Farmers Education Association for three years then Program Manager and finally Fund-Raising lead for the Association.

“Jimmy Emmons is a great addition to the soil health team.” Seiger said. “Oklahoma has always had a strong soil health team. It’s wonderful to be able to promote it to a large company. It’s nice to have General Mills confidence in us, and this will help us reach a whole new group of producers.”

Emmons said his goal is to help people understand that the soil is a living functional place that will help us take care of the soil instead of abusing it.

“With a better knowledge of the soil, we can have more water to work with that’s cleaner downstream for our wildlife and human consumption, also lessening the need for chemicals and synthetic fertilizers adding to the bottom line,” Emmons said. 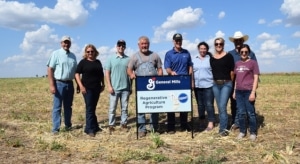 OKLAHOMA CITY — It’s somewhat ironic when items that can’t talk speak volumes. Jimmy Emmons, Oklahoma Conservation Commission Soil Health Mentoring Coordinator, kicks up a little dust as he walks about 40 yards out into a conventional-tilled field, so filled with clods it resembles eggs gathered in a basket. Emmons kneels and sticks a soil […]