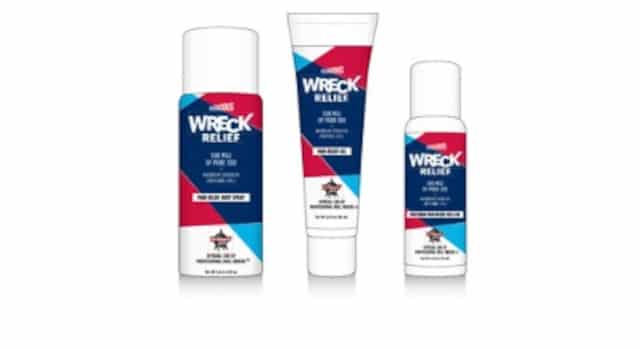 The multi-faceted partnership, which includes manufacturing and distributing PBR-branded CBD products, is one of the most expansive to date between a CBD brand and a major professional sports association and further normalizes the use of CBD in recovery related applications.

A groundbreaking element to the partnership is the upcoming launch of a full PBR-endorsed line of topical CBD products. These products include pain relief and recovery products, which feature proven pain relief ingredients such as menthol and lidocaine as well as a generous 500 mgs of CBD, available in roll-on, gel and spray formats. AUDACIOUS will be launching its new CBD product line under the brand Wreck Relief. The products will debut on-line and at the 2021 PBR World Finals, Nov. 3 – 7 in Las Vegas, marking one of the first times a major professional sports organization has licensed a CBD product. These products will also be available for large retail chains in 2022.

The multi-year deal with PBR is the Company’s first and only sports sponsorship to date. It utilizes PBR as a national brand building and awareness platform to build visibility among the sport’s 83 million fans[1]. The total CBD market in the U.S. is anticipated to reach $23 billion by 2023, according to industry insider estimates, providing a huge opportunity for a brand that combines quality with distribution and nationwide visibility. Through the exclusive nature of the PBR partnership, the Company will be achieving this, creating a sustainable competitive advantage.

Beyond its large fanbase, PBR has a significant footprint on social media, with annual impressions approaching 2 billion and close to 700 million video views. Furthermore, CBS broadcasts PBR events, reaching an audience of millions. This visibility provides very significant coverage for the new product line among a demographic that has been found to have a higher than average propensity to purchase products that AUDACIOUS is launching.

The consumer-facing elements of the partnership on behalf of the Wreck Relief brand will feature in-arena commercials and digital signage at PBR events, TV-visible signage in the bucking chutes and rider walk off areas, custom content on PBR’s social and digital channels, and brand entitlement of the PBR Sports Medicine team, which will be renamed the AUDACIOUS PBR Wreck Relief Sports Medicine Team.

Audacious CBD products will also be integrated into the PBR Sport Performance Center in Pueblo, Colorado., the first of its kind training, development and recovery center designed specifically for western sports athletes, while serving athletes of all sports. PBR athletes will also participate in a research program evaluating the benefits of CBD products.

Sean Gleason, Commissioner and CEO of PBR, stated “Professional bull riders are considered among the toughest athletes in sports, followed by hard-working fans who often hold physically demanding jobs that take a toll on their bodies. PBR has long been an innovator in providing reach and value to our brand partners, and we are very excited to again break new ground in helping AUDACIOUS tell their story while we also participate in researching the benefits of CBD products for our athletes.”

Terry Booth, AUDACIOUS CEO, commented, “CBD as a category, we believe, has incredible potential, especially in the wellness space. The partnership with PBR provides us with a very significant competitive advantage over other companies with CBD product due to the credibility of our partner. This is another bold move that shows how AUDACIOUS, our capabilities and what we stand for resonate with large, relevant organizations. PBR, which is part of Endeavor (NYSE: EXK), is an amazing organization that is doing exceptionally well, and we are proud to have been selected as their exclusive CBD partner.”

Leah Bailey, Chief Business Development Officer for AUDACIOUS, commented, “We see tremendous synergies between our CBD product line and the PBR platform, particularly given the punishment PBR riders endure. As these products are integrated into the PBR athletes’ wellness regime and PBR’s comprehensive rider development program, we believe we will gain new ambassadors for our brand and products. These athletes and PBR are key influencers with a large reach among an audience that represents approximately 25% of the total U.S. population of 330 million people. We are very excited about this partnership, as PBR will help us build a credible brand in the CBD / recovery category that is not just for athletes but for everyone looking to integrate the potential benefits of CBD into their overall wellness routine. We look forward to the official launch of this new AUDACIOUS brand in November and working closely with the team at PBR to introduce their audience and all active adults to our products.”

Headquartered in Pueblo, Colorado., PBR was created in 1992 by a group of 20 visionary bull riders who broke away from the traditional rodeo scene, seeking mainstream attention, new riches and a livelihood for future generations of cowboys for the most popular discipline in rodeo, bull riding.  More than 500 bull riders from around the world including the United States, Australia, Brazil, Canada and Mexico hold PBR memberships. They compete in more than 200 bull riding events each year on the nationally-televised Unleash The Beast series, Pendleton Whisky Velocity Tour and Touring Pro Division, in addition to those held by international divisions in Australia, Brazil, Canada and Mexico.

Collectively, PBR broadcasts reach 250MM households in more than 20 countries, and RidePass on Pluto TV will carry hundreds of hours of annual PBR and rodeo events live and on-demand to the world’s leading free advertiser-supported TV network. On social media, from January through November 2020, PBR generated more than 1.7 billion impressions on social media, 606 million video views and 629 million video minutes viewed. PBR’s channels are recognized to have among the most fan engagement of all major sports.

Audacious is at its roots a community and culture-based cannabis company. After the completion of a dissident shareholder battle that ended with convincing shareholder approval, Terry Booth, former Aurora CEO, who had to step away from AUSA upon spin off, re-joined AUSA as CEO on March 9, 2021. Since then, the company has reset the direction of AUSA and in just 3 months closed multiple accretive transactions, improved legacy contracts, established a world class Executive Team, and resolved previous executive and board exits.

Also, in the same 3-month time frame, AUSA with its acquisition of ALPS has entered the global Sustainable Controlled Environment Agriculture Industry, a rapidly growing segment of the global horticulture market. ALPS provides customized designs along with multiple services that allow operators to maximize yield and quality while minimizing inputs and resources, including labor. ALPS at present is active in cannabis and traditional horticulture projects across the globe, including the U.S., Canada, Denmark Finland, Iceland, Germany, Netherlands, Bahrein, United Arab Emirates, Southeast Asia, Australia, as well as other jurisdictions.

Total Capex committed by ALPS’ clients since Aurora divested its interest just 12 short months ago during the Covid crisis, stands at approximately $1 billion, with a rapidly growing business development pipeline with over $4 billion in total Capex planned to be spent by potential clients.

AUSA’s business assets include: a 51% ownership interest in ALPS, a milestone weighted deal with an option to acquire the remaining 49% of ALPS –- AUSA and Green Therapeutics, an award-winning MSO, have finalized and agreed to all terms with respect to AUSA’s 100% acquisition (subject to regulatory state licensing approvals). AUSA also owns land assets in Bellingham, Washington – as well as the iconic West Coast brand Mr. Natural and the ingestibles brand LOOS with a footprint in the California market. AUDACIOUS also has a partnership with the PBR, the professional bull riders association. Under the partnership, the Company is launching a PBR endorsed line of topical CBD products under the Wreck Relief brand.

AUSA also has a supply partnership with Belle Fleur, founded by the team behind Rapper Weed. Machine Gun Kelly, recently stated: “I just bought $1,000 worth of Rapper Weed at Cookies in Maywood. These guys have the best flower in the game.” AUSA and Belle Fleur are working towards a broader arrangement to include brand partnerships in Massachusetts and other jurisdictions the companies intend entering into.

AUSA furthermore has investments in Body and Mind Inc., a U.S. MSO, Quality Green, a Canadian licensed producer and Cocoon, a company changing the dispensary customer user experience through self-service kiosks. The Company also has entered into a sponsorship agreement with Endeavour owned Professional Bull Riders, as well as executed a term sheet for a JV partnership with U.S. and Canada-based 3 Rivers Biotech for plant tissue culture, genetics clean-up and micro propagation.

New book gives kids glimpse of a "Barn at Night"