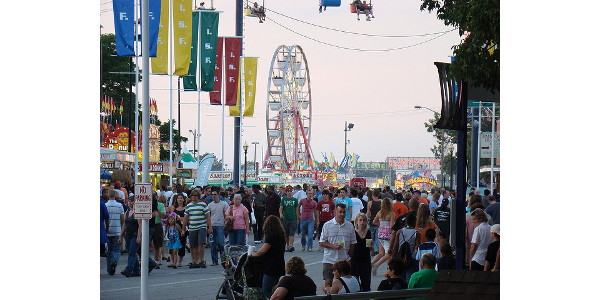 State Fair Manager Kevin Gordon is proud to announce that preliminary estimates indicate that attendance at the 2017 fair increased by 15.5-percent, while gate and parking revenue increased by nearly 10-percent. (Katherine Johnson via Flickr)

“The goal of the Illinois State Fair is to provide family-friendly and affordable entertainment for our fairgoers,” said State Fair Manager Kevin Gordon.  “When we began planning the 2017 fair, we took a hard look at what more we could do to provide additional discounts for families who wish to attend this annual tradition.  As a result, we added a mid-week discount admission day and decreased the cost to park on the grounds. In addition, we sought to make a number of upgrades towards free entertainment, which included never before seen performers and entertainers.

Gate and parking revenue estimates also appear to have increased year-over-year, largely thanks to the cooperation of Mother Nature.  Preliminary estimates show a 10-percent increase in gate and parking admission brought in during the 2017 Illinois State Fair.  As a reminder, in 2016 due to record rainfall the Illinois State Fair was only able to fully utilize its main parking lot (Gate 6) the first two days of the fair resulting in thousands of dollars in lost revenue.

2017 also proved to be the second highest-grossing Grandstand lineup in State Fair history with ticket sales of more than $2 million.  With these impressive sales, the Illinois State Fair was able to re-coop more than 100-percent of its Grandstand entertainment investment.

Annually, the Illinois State Fair provides a tremendous economic impact to the city of Springfield and surrounding communities.  “I’ve been attending the Illinois State Fair my entire life,” said Ag Director Raymond Poe.  “I’ve seen, first hand, the number of people this fair puts to work from inside the fairgrounds to outside the fairgrounds.  Not only that, but the people who come to the fair patronize our local restaurants, hotels, gas stations, and other area tourist attractions, which has a direct impact on our local economy.”

The most recent economic impact study conducted by the University of Illinois Regional Economics Applications Laboratory shows the Illinois State Fair contributes $86 million in business volume to the local economy.  This includes $35 million for wages and salaries and $2.67 million in state sales tax revenue.

Attendance was determined based on the number of tickets purchased and turned in at the gates.  This takes into account anyone who contributed to the commerce of the Illinois State Fair.  As in previous years, a formula provides multipliers, based on national averages, to count visitors who cannot be tracked by a ticket due to the fair’s various free admission days.

Below is the attendance breakdown per day at the 2017 Illinois State Fair: