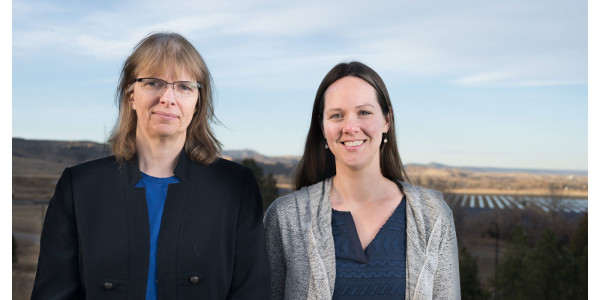 FORT COLLINS, Colo. — The term “artificial intelligence” may not immediately conjure associations with the warming of Earth’s atmosphere.

But now more than ever, climate researchers are turning to trainable, data-nimble computer programs as tools for improving climate models, weather forecasting and more.

Nowhere is this truer than in the lab of Elizabeth (Libby) Barnes, associate professor in the Colorado State University Department of Atmospheric Science. Barnes is a climate scientist who studies global atmospheric dynamics and variability, in part for making skillful, accurate predictions of weather weeks in advance.

These days, Barnes is just as quick to call herself a data scientist. She believes climate science is well positioned to harness machine learning methods to uncover new knowledge about how the global climate functions, how it’s changing, and why.

Machine learning is a branch of artificial intelligence that can use computer algorithms to “learn” from input data what the output should be. One tool, called an artificial neural network, can learn to recognize patterns and glean new information in a dataset by performing many simple operations simultaneously, somewhat like a brain. A neural network can be “trained” with real input and output data, in order to make predictions – in Barnes’ case, climate data.

“I think we’re at the point where we can’t ignore the fact that we, as atmospheric scientists, are all data scientists,” Barnes said. “If you think about it, compared to most geoscience disciplines, we are data-rich.”

“I think we’re at the point where we can’t ignore the fact that we, as atmospheric scientists, are all data scientists.”

Take, for instance, the hundreds of weather satellites orbiting Earth daily, beaming petabytes of minute-by-minute atmospheric data to places like CSU’s Cooperative Institute for Research in the Atmosphere (CIRA) for processing. Meanwhile, the National Oceanic and Atmospheric Administration (NOAA) collects daily data from thousands of ground-based radars, gathering granular information on temperature, wind and rain. Compare that to a field like oceanography, Barnes says: We know relatively little about what the bottom of the ocean looks like, but climate scientists “have data coming out of our ears, and we are constantly trying to come up with new ways to process and interpret that data.”

That’s why Barnes has formed a close collaboration with experts who can help her do just that.

About three years ago, Barnes met Imme Ebert-Uphoff, a research faculty member in the CSU Department of Electrical and Computer Engineering and the machine learning lead for CIRA. A former robotics professor, Ebert-Uphoff decided several years ago to apply her machine learning background to something more personally meaningful. She chose climate science, she said, because “I care a lot about this planet.”

At CIRA, Ebert-Uphoff supports emerging machine learning work the cooperative institute does for NASA and NOAA – which recently defined artificial intelligence as one of its core priorities in coming years. Ebert-Uphoff’s passion is building a research community that bridges the fields of data science and geoscience.

Ebert-Uphoff sometimes acts as a kind of interpreter – a go-between who can understand the language of both climate and computers. She’s the bridge that has connected Barnes with Chuck Anderson, a professor in the Department of Computer Science who has worked in the development of artificial neural networks since the 1980s. Together, Barnes, Ebert-Uphoff and Anderson have sought to tackle one of the most fundamental, complex questions the climate field has faced: How to identify definitive signals of climate change across a variety of models that sometimes disagree.

The three scientists are co-authors, with James W. Hurrell and David Anderson, on a newly accepted paper in Geophysical Research Letters that uses neural networks to separate out clear patterns of forced temperature and precipitation changes due to human activities, amidst a sea of natural climate variability (the reason we can still have extreme cold weather even though the globe is warming).

“Someone hands you their data, and you get to find where the valuable jewels are.”

Their experiments produced some surprising insights: for one, the Arctic is not a good indicator of climate change because of high levels of natural variation in that region’s environment. They found much stronger signals around the equator.

“Imme and Libby are true scientists – they are trying to figure out something new about the Earth,” Anderson said. “I’ve learned how important it is to get out of my computer science department and talk in the language of other scientists and experts.”

Anderson has spent his career “under the hood” of machine learning algorithms, seeking to apply his methods to other fields. And to this day, nothing gets Anderson more excited than a large trove of data to query. “Someone hands you their data, and you get to find where the valuable jewels are,” he said.

The scientists are continuing their collaboration with support from the NOAA Modeling, Analysis, Predictions and Projections division, which recently awarded the team $197,000 to further their efforts around machine learning as predictive tools for climate and weather.

Machine learning for weather applications has others around the CSU atmospheric science campus motivated, too. Chris Slocum, a NOAA tropical cyclone specialist working at CIRA, is experimenting with using machine learning applications to build accurate, synthetic images of storms as they progress, using infrared and microwave data gathered by different satellites.

Slocum started dabbling with neural networks as an entertaining side project while he worked on his dissertation a few years ago. With the launch of the multi-channel GOES geostationary satellites, which take a full-disk picture of the Earth every 10 minutes, Slocum saw an opportunity to dig into how increasingly user-friendly neural networks might help turn some of those daily terabytes of data into innovative forecasting tools.

His latest project, which NOAA has funded for CIRA researchers, was inspired by the storm track of Hurricane Michael, which crossed through the Caribbean Sea and Gulf of Mexico before  devastating the panhandle of Florida last year. During the few days when Michael wasn’t yet a full-blown hurricane, but just a cluster of thunderstorms, forecasters had trouble identifying Michael’s center – a crucial indicator of a hurricane’s future track. That was due to the fact that Michael was gaining strength in the middle of the ocean, where there are no ground radars available.

To address a future problem like this, Slocum is using an open-source neural network to generate synthetic microwave data – similar to what an actual radar would see – from geostationary GOES satellite data.

Microwave imagers on polar-orbiting satellites can “see” through clouds to get at the heart of storms, but those satellites only fly over any given storm once or twice a day. The GOES satellite, on the other hand, is in geostationary orbit, essentially “staring” at a storm 24/7, but lacks a microwave imager.

Slocum’s solution is to find cases where he has both polar and geostationary data at the same time, then train his neural network to use infrared data from GOES to learn to make accurate, synthetic microwave data that matches the real polar-orbiting microwave data. If successful, he could generate microwave imagery using only GOES data, whether the polar-orbiting satellite is in the right place or not – then get that data to forecasters who need it. Slocum will present this ongoing work in January at the American Meteorological Society meeting.

For Slocum, the potential benefits of letting an algorithm process and learn what a forecaster can’t, or doesn’t have time for, are easy to fathom.

“I think people on the climate and weather side are seeing machine learning as a new tool that can go through a lot of data pretty quickly, tease out what’s important, and highlight new relationships in the data we may not have thought of,” Slocum said.

Work at CSU continues to push boundaries in these and other areas. Barnes and Ebert-Uphoff are involved in a National Science Foundation-funded, multi-institutional project headed by University of Minnesota that will use physics-guided machine learning in a variety of contexts, from biology to earth science. They will lead the climate science-driven portion of the study, in collaboration with CSU social scientist Jeni Cross, director of the Institute for Research in the Social Sciences. Cross is an expert in the “science of team science,” and her role will be to help all the partners communicate and collaborate effectively across disciplinary and institutional boundaries.

While Barnes and Ebert-Uphoff are excited by the potential power of machine learning, they also are cautious about using it without clear objectives in mind. Nowadays, anyone can download a neural network from Google, plug in their data, and see what comes out.

An unguided approach that uses machine learning like a magic black box, without considering the inner mechanisms of the tool or understanding its limitations, would be harmful to climate science; results would lack transparency and could not necessarily be trusted. A guided, informed use of artificial intelligence, on the other hand, allows for confidence in the results while obtaining new knowledge and insight from these uniquely powerful tools.

Barnes and Ebert-Uphoff have recently authored an essay outlining a thoughtful, useful approach to machine learning in the context of climate science. They hope it will serve as a guide for other scientists who are increasingly looking to use these methods to improve our understanding of a complex environmental system.

Matthew Rogers of CIRA contributed to this story.

Not all soils are created equal

Trend of consolidation of US agriculture continues
July 26, 2020