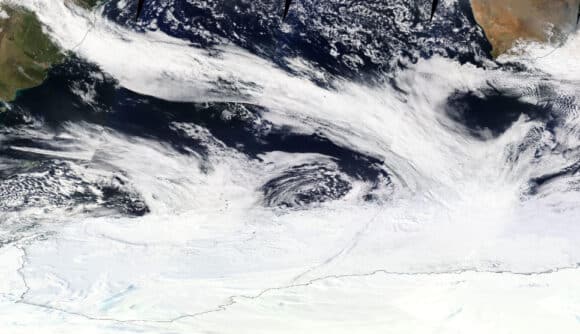 Warm, moist rivers of air in Antarctica play a key role in creating massive holes in sea ice in the Weddell Sea and may influence ocean conditions around the vast continent as well as climate change, according to Rutgers co-authored research. (photo provided by Rutgers University)

NEW BRUNSWICK, N.J. — Warm, moist rivers of air in Antarctica play a key role in creating massive holes in sea ice in the Weddell Sea and may influence ocean conditions around the vast continent as well as climate change, according to Rutgers co-authored research.

Scientists studied the role of long, intense plumes of warm, moist air – known as atmospheric rivers – in creating enormous openings in sea ice. They focused on the Weddell Sea region of the Southern Ocean near Antarctica, where these sea ice holes (called polynyas) infrequently develop during the winter. A large hole in this area was first observed in 1973 and a hole developed again in the late winter and early spring of 2017.

In the first study of its kind, published in the journal Science Advances, scientists found that repeated strong atmospheric rivers during late August through mid-September 2017 played a crucial role in forming the sea ice hole. These rivers brought warm, moist air from the coast of South America to the polar environment, warming the sea ice surface and making it vulnerable to melting.

“Polynyas strongly influence the physical and ecological dynamics of the Southern Ocean,” said co-author Kyle Mattingly, a post-doctoral researcher at the Rutgers Institute of Earth, Ocean, and Atmospheric Sciences. “They serve as giant ‘windows’ in the sea ice that allow large amounts of heat to move from the ocean to the atmosphere, modifying regional and global ocean circulation. They also affect the timing and magnitude of phytoplankton (algae) blooms, which are the base of the marine food web. Our study will pave the way for greater understanding of climate variability and climate change in these regions.”

Previous studies have found that atmospheric rivers influence melting of West Antarctic land ice and ice shelves, and the new study builds on those findings by showing their effects on Antarctic sea ice for the first time. The rivers are thousands of miles long and the sea ice holes cover thousands of square miles, usually at specific locations that are primed by local ocean circulation conditions.

West Antarctica, an enormous ice sheet that sits on land, is melting and contributing to global sea-level rise, and the melting has accelerated in the 21st century. If the entire Antarctic Ice Sheet melted, the ocean level would rise by about 200 feet, according to the National Snow & Ice Data Center. Sea-level rise and flooding from coastal storms threaten coastal communities worldwide, especially in low-lying areas.

Under projected future climate change, atmospheric rivers are predicted to become more frequent, longer, wider and more effective in moving high levels of water vapor toward the Antarctic Ocean and continent, along with increasing the intensity of precipitation. In general, where they make landfall is predicted to shift toward the poles, and the effect of climate change on sea ice holes in the Weddell Sea and elsewhere in the Southern Ocean is an important area for future research. 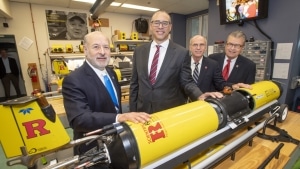 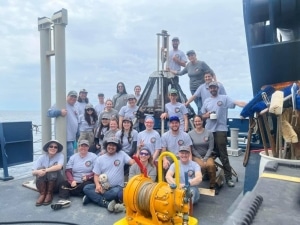 Rutgers Science and Outreach Onboard the R/V Atlantis

NEW BRUNSWICK, N.J. — In June 2022, a team of scientists and educators embarked on a 14-day expedition in the North Atlantic Ocean onboard the R/V Atlantis in search of deep-sea mud. Led by chief scientist and professor, Liz Sikes, Department of Marine and Coastal Sciences and primary investigator and University of Washington professor, Julian […] 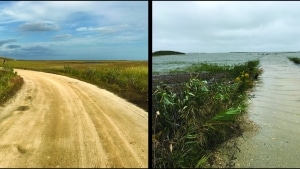 NEW BRUNSWICK, N.J. — The rate of sea-level rise in the 20th century along much of the U.S. Atlantic coast was the fastest in 2,000 years, and southern New Jersey had the fastest rates, according to a Rutgers-led study. The global rise in sea level from melting ice and warming oceans from 1900 to 2000 […]