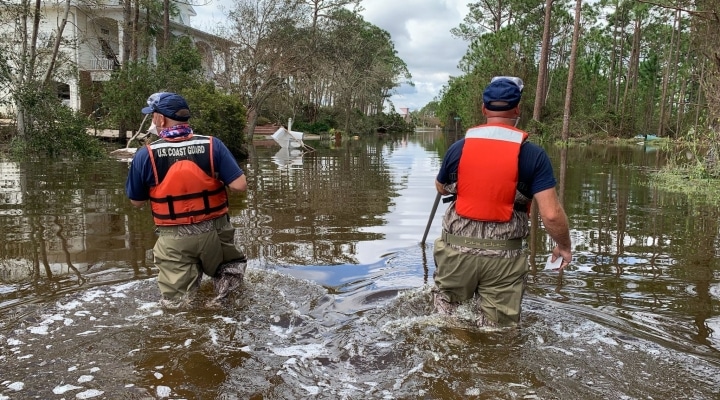 The seasonal crops, livestock and aquaculture products produced in the region are valued at approximately $400 million and directly support over 8,000 jobs, and that’s not including related economic contributions in supporting industries. (photo by Coast Guard News, Creative Commons/Flickr.com)

But like the rest of the state, the Panhandle is more than its tourist-attracting beaches. The seasonal crops, livestock and aquaculture products produced in the region are valued at approximately $400 million and directly support over 8,000 jobs, and that’s not including related economic contributions in supporting industries.

The affected counties represent major producers of several agricultural products. This includes, per 2018 data from the Florida Department of Agriculture and Consumer Services, approximately 100,000 acres each of peanuts, cotton and hay; around 10,000 acres of corn; nearly 4,000 acres of horse farms; plus other commodities like aquaculture fish and shellfish. To capture the full impact on the damages to these commodities from Hurricane Sally, the UF/IFAS Economic Impact Analysis Program is preparing to conduct an assessment of the damages.

“These types of climate-related disasters are the most destructive to agriculture,” said Christa Court, director of the program and an assistant professor in the UF/IFAS food and resource economics department. “When we do our assessments, we’re really looking to capture the acute, short-term impacts, like losses of seasonal crops that were in the field when the storm hit, but we know that other impacts will appear in the long-term.”

The assessment surveys, completed via an online survey tool or paper survey by local Florida Cooperative Extension agents or producers themselves, aim to capture impacts to sales revenues for the wide variety of industries covered. Even ancillary components of operations can be affected, although Court adds that these will not necessarily be captured quantitatively within the survey.

“As examples, the area has grazing or pasture land that the USDA had classified as ‘in excellent condition’ in recent crop progress reports, as well as significant timber resources,” Court said. “Further along the supply chain, there is also food or crop processing in the area, such as timber mills, cotton gins, etc., that might be shut down due to flooding or be inaccessible due to road closures that are not currently covered in our assessment efforts, which focus on agricultural production. Also, we know there are roughly 8,000 to 9,000 farm-related buildings – homes, barns, greenhouses, other structures – that are in the area and at risk of flooding or wind damage.”

Court cautions that power outages, impassible roads and other challenges could affect the ability to conduct assessments until those issues can be addressed.

“With roads and bridges being closed, it’s going to be some time before anyone is able to really assess what happened,” agreed Pete Vergot, who oversees all of the affected counties as director of the UF/IFAS Northwest Extension District. “Reports that I’ve gotten back from county Extension directors is that water is the biggest effect. Our producers were already dealing with saturated fields before all this happened.”

In addition to producers’ fields, also at risk in the region were several UF/IFAS buildings, which house programs that support growers and others in these communities: 16 county extension offices; four Research and Education Center sites in Marianna, Quincy, Milton and Jay; and 4-H Camp Timpoochee.

According to Jennifer Bearden, UF/IFAS Extension Okaloosa County agriculture agent, her local growers had been dealing with a rainy growing season that presented other challenges, like boll rot in cotton fields. Tropical storm force winds likely sent much of that crop to the ground, but she says what remains is now even more susceptible to the disease already sweeping through the fields.

She listed the other crops she helps troubleshoot for farmers in her county: “We still had some corn to be harvested but with the excess moisture and wind it may be a huge loss. Soybeans also were looking good but will likely suffer significant losses. Peanuts will probably be the least affected, but harvest will likely be delayed some due to transportation issues.”

But it’s not just plants at risk, Bearden added.

“Livestock owners face issues like trees down on fences and structures, feed and hay availability, and water availability due to power outages,” she said. “In the near future, mosquito-spread diseases can be an issue, such as encephalitis.”

Even still, Bearden noted, the rivers are rising.

“Time will tell if this will affect yields significantly,” Bearden said. “The longer we delay, the more yield losses we will see. We will have a better idea come next week when the rivers start receding.”

Court confirms that the amount of water brought by Hurricane Sally presents an unusual assessment ahead.

“Typically, we are assessing crops that have wind damage, and it is easy to tell what has been lost or destroyed,”
she said. “It might be weeks or months before growers are able to determine the full impact of flooded fields – crops might be destroyed, experience lower yield or lower quality product, etc. We also aren’t sure of the impact of soil erosion, things like sink holes, or even soil salinity for areas near the coast that got storm surge.”