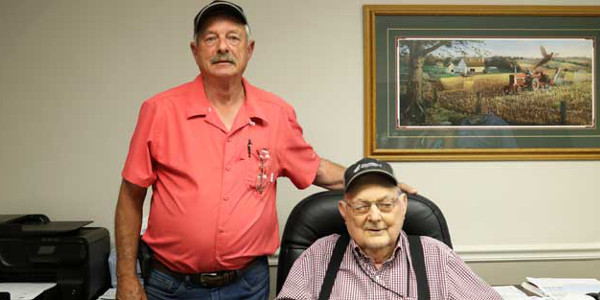 As agribusiness merger mania sweeps across the nation and around the world, Kentucky's oldest family-owned seed company, Caverndale Farms, keeps chugging along on its own after 80 years along Bluegrass Pike in northern Boyle County. (Courtesy of Kentucky Department of Agriculture)

DANVILLE, Ky. — As agribusiness merger mania sweeps across the nation and around the world, Kentucky’s oldest family-owned seed company, Caverndale Farms, keeps chugging along on its own after 80 years along Bluegrass Pike in northern Boyle County.

“We feel fortunate that we’ve survived all these years with all the consolidations,” said 89-year-old Caverndale owner Clyde Jackson, whose daughter, Brenda Welty, and her husband, Barry, run the Kentucky Proud seed business. “It’s tough out there as a small, independent company, but we’re still around.”

“We’ve got some fresh blood now, so I think we’ll be able to carry on,” Clyde said.

Kentucky Proud Seed Company
Clyde is referring to the third generation of the family, three grandsons, who perform all of the day-to-day farming operations.

“They took a great interest in it,” Clyde said proudly. “They’re very active in the business.”

Caverndale Farms consists of 4,500 acres. About 2,500 acres are mostly row crops divided evenly between corn and soybeans. The other 2,000 acres are all pasture and hay with a small crop of winter wheat.

The hay and wheat supply the farm’s cow-calf operation with a herd of nearly 700 cows. The grass-fed calves are sold to Kentucky Proud’s Marksbury Meats near Lancaster.

All of the farm’s soybeans are sold as Caverndale Farms Brand Seed, while all of its corn is sold locally either to farmers or, since 2012, to nearby Wilderness Trail Distillery.

“We have a very good relationship with them,” Barry said. “They just finished a major expansion, so they’re going to take the biggest majority of the corn we can grow.”

Barry said Wilderness Trail and other Kentucky distillers have increased their use of Kentucky corn in their spirits from 35 to 40 percent in 2012, when Indiana was a major supplier.

Clyde, who will turn 90 in December, bought the farm and seed company in 1955. Caverndale, allegedly named after three caves near the farm’s 216-year-old brick farmhouse, was founded on the same site in 1938 by Will Rogers.

“He’s one of the first people to grow hybrid seed corn in the state,” said Clyde, who grew corn for Rogers before buying the operation.

Caverndale started growing “U.S. 13,” one of the first double-crossed hybrid corn varieties, in 1940. The new type almost doubled yields over the 20 bushels an acre from the standard seed corn of the day.

In 1965, Caverndale began producing and distributing hybrids for Golden Acres Seed Co. throughout the eastern U.S.

“For a number of years, we grew for one company,” Clyde said. “They had sales all over the world.”

After Golden Acres was bought and sold five times, finally to Mycogen, Caverndale struck out on its own in 1987.

“We were lost in the shuffle,” Clyde said. “So we did our own brand.”

On July 10 in Owensboro, Clyde was presented the 2018 Outstanding Conservation Cooperator Award by the Kentucky Association of Conservation Districts.

In 1992, Clyde was recognized for Distinguished Service to the Kentucky Seed Improvement Association. He won the Kentucky Association of County Agricultural Agents’ 1988 Outstanding Lay Leader Award and was the Danville Junior Chamber of Commerce’s Outstanding Young Farmer in 1959.

Caverndale was to host a field day on Aug. 2 along with the Boyle County Beef Cattlemen’s Association and Boyle County Conservation District.

Caverndale’s slogan sums up the business: “Quality seed, family owned, one farm, one bag at a time.”

For more information about the company, visit CaverndaleFarms.com.