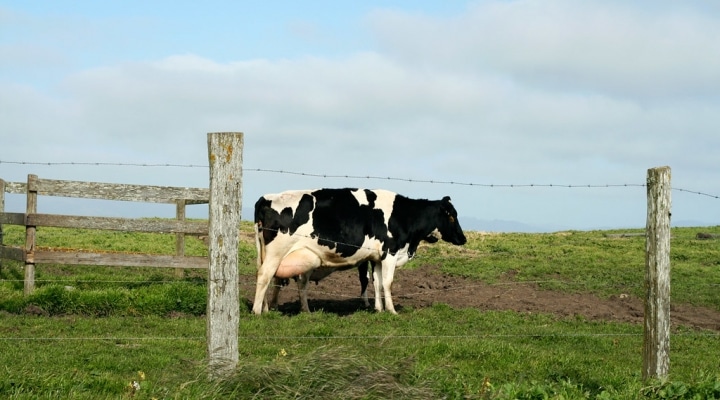 Dairy cows that received a short course of anti-inflammatory medication after calving had lower metabolic stress and produced more milk than untreated cows, according to researchers, who say the regimen they tested could be adopted more easily by producers than previously studied treatment strategies. (photo by Anita Hart, Creative Commons/flickr.com)

UNIVERSITY PARK, Pa. — Dairy cows that received a short course of anti-inflammatory medication after calving had lower metabolic stress and produced more milk than untreated cows, according to researchers, who say the regimen they tested could be adopted more easily by producers than previously studied treatment strategies.

An extension veterinarian, Barragan noted that stress and inflammation related to calving can increase the incidence of diseases such as mastitis, an infection of the udder, and clinical metritis, which is a bacterial infection of the uterus that can affect up to 40% of postpartum animals. Previous research suggests that each case of clinical metritis can cost producers about $359, and the total estimated costs of metritis to the dairy industry are estimated at $650 million.

“Decreasing this inflammation and stress could be a potential strategy for preventing disease in early lactation, improving the welfare and performance of dairy cows, and reducing disease-related costs for producers,” he said.

Barragan explained that in this study, the research team set out to test a regimen that would be less labor-intensive and less expensive than similar methods used in previous studies. A major goal of the project was to prove the effectiveness of a treatment that would be relatively easy and economical for producers to adopt.

The researchers, who recently reported their findings in the Journal of Dairy Science, hypothesized that cows treated with the NSAID acetylsalicylic acid — better known as aspirin — after giving birth would have lower incidence of diseases, lower biomarkers of metabolic stress and increased milk yields compared to untreated cows.

To test this, 246 cows at a family-owned dairy farm in central Pennsylvania were studied, from calving throughout lactation. The treatment group received two treatments with aspirin, the first within 12 hours after birthing and the second 24 hours later.

The aspirin was administered in boluses, or in pill form, as opposed to previous studies’ protocols in which the drug was pumped into the rumen or injected — methods that are more labor-intensive and time consuming — or mixed in drinking water, which may lead to inexact dosing. Earlier research also called for shorter intervals between treatments and/or longer courses of treatment.

“We found that cows treated with the proposed anti-inflammatory strategy had lower metabolic stress 14 days after calving and a lower incidence of clinical metritis, compared to untreated cows,” Barragan said. “Also, treated cows that had given birth more than once, known as multiparous cows, produced 3.6 more pounds of milk per day during the first 60 days in milk compared to their untreated counterparts.”

Although the published study did not include an economic analysis, he pointed out that the estimated value of this increased milk production for an average Pennsylvania dairy herd of 80 cows — taking into account current milk prices and costs for aspirin treatment and labor — would be about $2,250 annually.

“These results suggest that an easy-to-apply, economical and practical anti-inflammatory strategy after calving may improve the health of dairy cows, enhancing both animal welfare and farm profitability,” Barragan said.