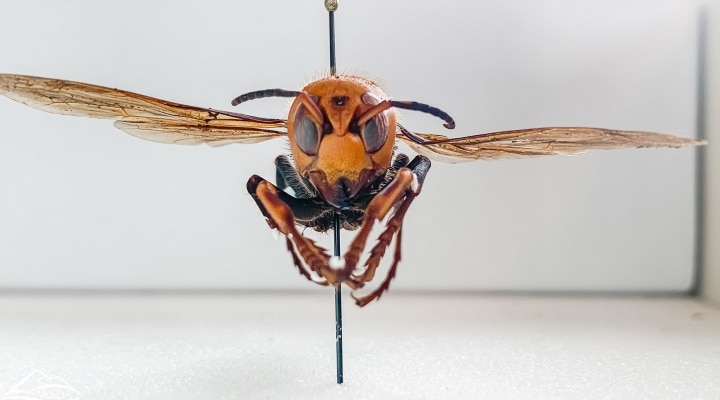 Recent alarming news reports aside, Asian giant hornets — sometimes referred to, hyperbolically, as "murder hornets" — are not an immediate concern in the Northeast, nor are they likely to be for a long time, if ever, according to an entomologist in Penn State's College of Agricultural Sciences. (photo by Washington State Department of Agriculture, Creative Commons/flickr.com)

UNIVERSITY PARK, Pa. — Recent alarming news reports aside, Asian giant hornets — sometimes referred to, hyperbolically, as “murder hornets” — are not an immediate concern in the Northeast, nor are they likely to be for a long time, if ever, according to an entomologist in Penn State’s College of Agricultural Sciences.

But Michael Skvarla, assistant research professor of arthropod identification, says the stinging insect, recently discovered in the Pacific Northwest, might cause issues for beekeepers if the hornet, scientifically known as Vespa mandarinia, becomes established and widespread in North America.

“The term ‘murder hornets’ originally was coined by a few Japanese media outlets several years ago, and a recent New York Times story using that description went viral, causing a bit of panic in the United States,” Skvarla said. “In their native range, they commonly are called ‘great sparrow bee’ in Japan, ‘tiger head bee’ in China and ‘general officer hornet’ in Korea.”

Until the Entomological Society of America, which governs the use of common names for insects in the United States, decides on the official designation for V. mandarinia, Skvarla contends that calling it “sparrow wasp” or “sparrow hornet” may be the best way to distinguish this species from others, since those names are similar to a name used in the wasp’s native range.

Whatever it’s called, V. mandarinia is a source of anxiety, in part, because of its size. Skvarla noted that Asian giant hornet queens are among the largest wasps in the world and can grow to a length of more than 2 inches, with a wingspan of 3 inches.

“However, the queens are seen outside the nest only when they are hibernating or in the spring before workers have emerged,” he said. “Asian giant hornet workers can grow to 1.5 inches in length and are similar in size to some wasps that occur in Pennsylvania.”

Skvarla stressed that Asian giant hornets are not present in Pennsylvania and are not known to occur in North America outside of Washington state and Vancouver Island, British Columbia, where colonies were found and eradicated in the second half of 2019. Additional queens were discovered in the same area in the spring of 2020, and attempts to find and eradicate colonies are ongoing.

Asian giant hornets are strikingly colored, with yellow heads, a black thorax, and yellow-and-black or yellow-and-brown striped abdomens. They typically build their nests underground, usually in abandoned rodent burrows in forests, often in association with pine roots. Nests sometimes are constructed in dead, hollow trunks or roots of trees, but these are never more than 3 to 6 feet above the ground.

Among wasp species found in eastern North America, the one most commonly confused for Asian giant hornets is the European hornet, which is similar in size, shape and color. However, the two species can be distinguished by several features.

Asian giant hornets, like other social wasps, can be defensive when they feel their nest is threatened or when they are defending a food source. Skvarla said stings from this insect, when they do occur, are extremely painful. “However, they don’t seek people out just to sting them for no reason like some human-hating guided missile.”

Perhaps contributing to V. mandarinia’s reputation for “murder” are reports indicating that Asian giant hornets kill about 50 people a year across their entire range — which includes large swaths of eastern Asia — due to sting-induced allergic reactions and, more rarely, multiple organ failure due to a large number of stings.

“This statistic often is alarming for people, but for perspective, an average of 62 Americans are killed every year by bees and wasps for the same reasons,” Skvarla said. “From 2000 to 2018 in Japan, where these wasps are most common and abundant, an average of 21 people died per year from all wasp, hornet and bee stings combined, with Asian giant hornets accounting for only a subset of those deaths.”

“That being said, it’s not clear that Asian giant hornets are ‘more deadly’ or more likely to induce an allergic reaction than honey bees, yellowjackets and other social wasps,” he said, “although there is a forthcoming paper that summarizes what little we know from the medical literature about Asian giant hornet stings.”

Individual hornets can kill many honey bees, discarding the heads, legs and abdomens and taking the protein-rich thoraxes back to the nest to feed the colony. Groups of three or more hornets can attack and decimate an entire honey bee hive.

“We’re not sure how Asian giant hornets might impact honey bees and American beekeepers,” Skvarla said. “Beekeepers in Asia have implemented a variety of strategies to combat the hornets. If this species becomes established and widespread in North America, some or all of these strategies potentially could be used here as well.”

More information about the Asian giant hornet can be found on the Penn State Extension website at https://extension.psu.edu/asian-giant-hornets.