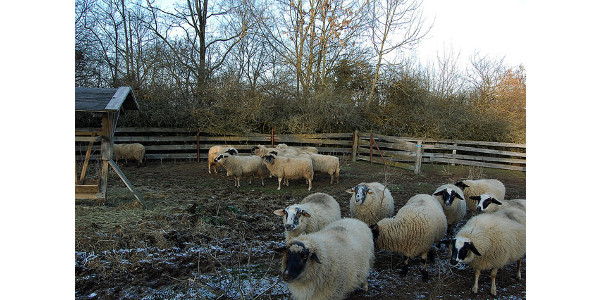 Immediately following Congressional passage of the CARES Act, ASI sent a letter to the U.S. Department of Agriculture urging temporary relief for sheep producers in the face of what had by then grown to an estimated $125 million farm level loss. (Midnight Believer via Flickr)

ENGLEWOOD, Colo. — Since the advent of this global pandemic, livestock markets have crashed, foodservice slowed to less than a trickle – which led to the sheep industry’s second largest packer declaring bankruptcy – and all this has sheep producers looking for some relief and certainty.

While the response has not been as quick as many had hoped, the American Sheep Industry Association and its state affiliates are working to urge temporary and long-term relief for an industry first hard hit by the trade disruption with China and then bashed against the rocks along with the larger economy.

Coming off a successful Spring Trip to Washington, D.C., federal agency offices and the U.S. Capitol were closed. The sheep industry was essentially the last agriculture industry fly-in of the winter. The Monday after our return, businesses across the country shut down in response to stopping the spread of a novel disease. As Congress debated a relief package, ASI was there urging House and Senate leadership of both parties to raise the limit on the Commodity Credit Corporation and replenish those funds so USDA could offer relief. And Congress acted with $14 billion to replenish the CCC and $9.5 billion in aid for livestock – a sector largely untouched in prior rounds of the Market Facilitation Program. Concurrently, ASI joined with the National Lamb Feeders Association to urge the Agricultural Marketing Service to purchase lamb through the $17 million lamb buy announced last summer.

Immediately following Congressional passage of the CARES Act, ASI sent a letter to the U.S. Department of Agriculture urging temporary relief for sheep producers in the face of what had by then grown to an estimated $125 million farm level loss. The situation on the ground was far beyond challenging as losses mounted for all sectors of the industry. ASI’s Legislative Council held a call and urged producers to reach out to their members of Congress.

ASI President Benny Cox said that the association followed that letter with analysis that updates the damage figure industry wide to $350 million and specifically notes the loss of key mandatory lamb price reports and therefore the Livestock Risk Protection insurance program for lamb. “The LRP-Lamb program is dependent on market reporting data and absent that data, the only risk protection tool for our industry could not be offered,” Cox said.

This has compounded ASI’s ask for relief for the wool and pelt market hit hard by the cessation of trade with China due to retaliatory tariffs and plummeting wool prices due to worldwide cancelled wool chain contracts from raw wool to fabrics due to the COVID-19 crisis. Wool export value is off 88 percent, and pelt prices are down 76 percent since the trade disruption started. In addition to a continued request for wool assistance under the MFP, ASI leadership has continued to work with USDA to gear up the Wool Loan Deficiency Program to respond to this wreck in the American wool market.

To avoid interruption of spring shearing in the United States, ASI has provided critical industry documents to shearers for their use when traveling to shear sheep.

As Congress looks to negotiate a future COVID response, ASI also sent a letter to Senate leadership requesting the inclusion of H-2A guest herder wages in Paycheck Protection Program eligibility. Unfortunately, the program guidelines released by the Small Business Administration based wage eligibility on the principal place of residence being the United States. In response to sheep grower’s concerns, ASI is urging that the PPP include H-2A wages to offer meaningful relief for this critical segment of our industry.

The association has also continued to work across agencies to ensure regulatory relief wherever it could in response to the issues raised. The U.S. Forest Service and the Bureau of Land Management have issued updated guidance for turnout with limited personal interaction. The Department of Transportation has removed hinderances to transporting critical needs, such as agricultural products. And the Department of Labor has engaged to offer flexibility under the guest worker programs.

ASI participated in a conversation this week with the team at USDA that is designing new assistance under the livestock stimulus and Market Facilitation Program and each sector from lamb feeding to sheep producer to processor relayed the damage already incurred as well as that expected for the 2020 lamb crop and wool clip. USDA was urged to target the $350 million in damages with equitable assistance to sheep industry operations. An additional call to action was issued on April 10 with the likely final push to include the industry in the relief.

How is your garden center going to do business this spring?