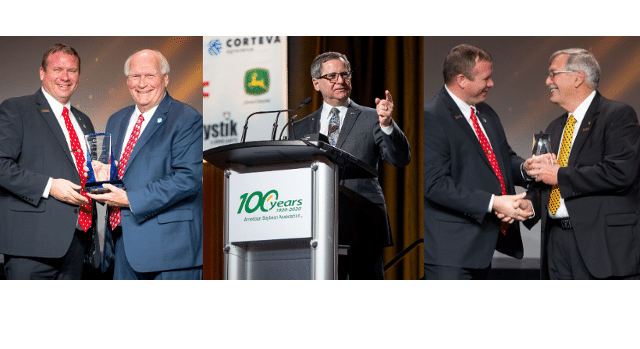 Congratulations to the 2020 winners:

ASA’s ultimate honor, the Pinnacle Award, is an industry-wide recognition of individuals who have demonstrated the highest level of contribution and leadership within the soybean family and industry, through work involving a significant amount of their lifetime.

For nearly 50 years, Kenlon Johannes has focused on broadening relationships to strengthen the soybean industry. After college and a few years teaching grade school, he returned to his family farm in Nebraska in the mid-1970s and joined the Nebraska Soybean Association and American Soybean Association. Now the of CEO of the Kansas Soybean Association and administrator of the Kansas Soybean Commission, in the past he served as the top executive for soybean associations in Wisconsin and Missouri. During the early 1990s, recognizing the untapped potential of surplus soybean oil, Johannes worked with farmer leaders and university researchers to promote and identify new uses for soybean oil—resulting in biodiesel.

In 1992, Johannes’ biodiesel passion led him to become the first executive director of the newly formed National SoyDiesel Development Board, which later became the National Biodiesel Board. Johannes’ commitment and skills as an educator and organizer, particularly around biodiesel, have made the U.S. soybean industry stronger for all soybean farmers.

Johannes’ commitment and skills as an educator and organizer, particularly around biodiesel, have made the U.S. soybean industry stronger for all soybean farmers.

Steve Wellman was a strong leader for both his state organization and ASA. He served as an ASA director for nine years and spent many of those years on the executive committee, including a term as ASA president and a two-year chairmanship of ASA’s Strategic Planning Committee, which created a new and strengthened path forward for ASA.

Engaging with and helping educate soybean farmers has always been important to Wellman, as has participating in international marketing missions to help grow U.S. soybean exports. His wide-ranging ASA experience in leadership and extensive involvement with agriculture policy has provided a strong foundation for his current role as director of the Nebraska Department of Agriculture. Wellman continues to serve as a leader in agriculture who achieves goals and inspires others.

The Outstanding State Volunteer Award recognizes the dedication and contributions of individuals who have given at least three-years of volunteer service in any area of their state soybean association operation.

Neal Bredehoeft served on the Missouri Soybean Association Board in all the state’s executive leadership positions and on the ASA board for nine years, including time on the ASA executive committee and a term as ASA president.

Bredehoeft was an early advocate for biodiesel in Missouri and throughout the U.S. and he continues that advocacy through involvement with his state association’s Biodiesel Working Group and support of biodiesel production in Missouri. He’s also represented Missouri soybean farmers during international marketing missions and welcomed numerous visiting trade delegations to his farm in western Missouri.

The soybean industry has benefited from Bredehoeft’s many hours of volunteer service in all areas and his long-term strategic thinking, commitment to maintaining a strong state organization, and focus on making a difference that will outlast his service.

How does flooding affect farms?