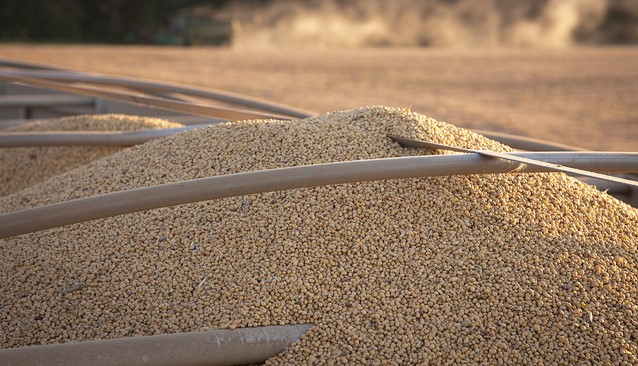 Ryan Findlay, CEO of ASA, commented, “We need strong, likeminded allies to galvanize farmers in a collective call for solutions from the Administration and Congressional leaders on advocating for new trade agreements and expanding international markets." (United Soybean Board, Flickr/Creative Commons)

WASHINGTON — This week, the American Soybean Association (ASA), the voice for more than 30 soybean-producing states and 300,000 soybean farmers across America, announced that it will be joining Farmers for Free Trade.

Farmers for Free Trade is a bipartisan campaign co-chaired by former Senators Max Baucus and Richard Lugar that is amplifying the voices of American farmers, ranchers and agricultural businesses that support free trade. The American Soybean Association joins the American Farm Bureau Federation, the National Pork Producers Council, and multiple other agriculture, trade and commodity groups that are partnering with Farmers for Free Trade to strengthen support for trade in rural communities.

Ryan Findlay, CEO of ASA, commented, “We need strong, likeminded allies to galvanize farmers in a collective call for solutions from the Administration and Congressional leaders on advocating for new trade agreements and expanding international markets. We have watched for some time and with appreciation the efforts of Farmers for Free Trade and the spirit of collaboration it has fostered to help ag and those industries related to agriculture and are happy to join their efforts.”

“The American Soybean Association has been a leader in promoting free trade in the agriculture sector,” said Senator Baucus. “Their addition to this important bipartisan effort will be invaluable in expanding our reach to soybean farmers across the country. Right now, soybean farmers are bearing the brunt of the ongoing trade war. Working together with Farmers for Free Trade, we aim to amplify the voices of these farmers to ensure that decision makers in Washington D.C. know the pain that tariffs are causing at the local level.”

“We are thrilled to add the American Soybean Association to the momentum of this rapidly growing effort,” said Senator Lugar. “The American Soybean Association knows that promoting agriculture-friendly, bipartisan trade policies on Capitol Hill starts with organizing America’s farmers at the grassroots level. With their help, we’ll be able to mobilize even more farmers whose livelihoods depend on trade. Their organization will significantly increase the voice of farmers at both the state and federal level. During a period of uncertainty caused by the imposition of new tariffs and declining farm income, we are especially glad to welcome soybean farmers to this bipartisan cause.”

Farmers for Free Trade is currently working at the grassroots level to organize and educate farmers about the importance of trade, including through work at state commodity conventions, through state proclamations, by reaching farmers through social media, and by identifying local spokespeople, among other efforts. Senators Baucus and Lugar outlined some of the key policy priorities that will help rebuild bipartisan support for trade, which can be found here.