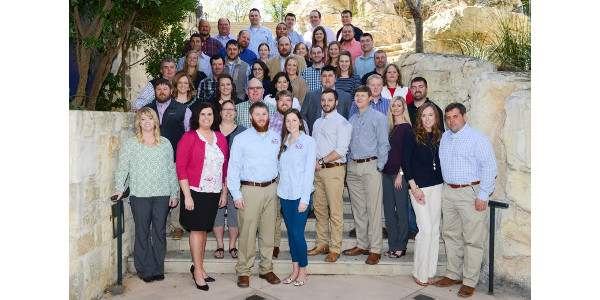 While in San Antonio, the Young Leaders participated in leadership and marketing training, issues updates and discussion and were recognized at ASA's annual awards banquet. (Courtesy of ASA)

“For more than 30 years, the ASA DuPont Young Leader program has identified new and emerging leaders for the soybean industry. The program provides training that strengthens their voices while networking opportunities create a connected and more collaborative organization,” said ASA President Ron Moore. “We’re grateful to DuPont Pioneer and DuPont for their commitment to this program and for helping secure the future of the soybean industry.”

While in San Antonio, the Young Leaders participated in leadership and marketing training, issues updates and discussion and were recognized at ASA’s annual awards banquet.

“This year’s class is a remarkable group of young leaders,” said Steve Reno, DuPont Pioneer vice president, business director — U.S. & Canada. Reno spent time with the growers when they were in Johnston earlier this year and then again at Commodity Classic. “This year’s class has focused significant energy into taking on the challenges facing our industry. I’m proud of our continued commitment to this program and impressed by the leadership skills being demonstrated already by these young leaders.”

'Meat' the Farmer at Lento Restaurant