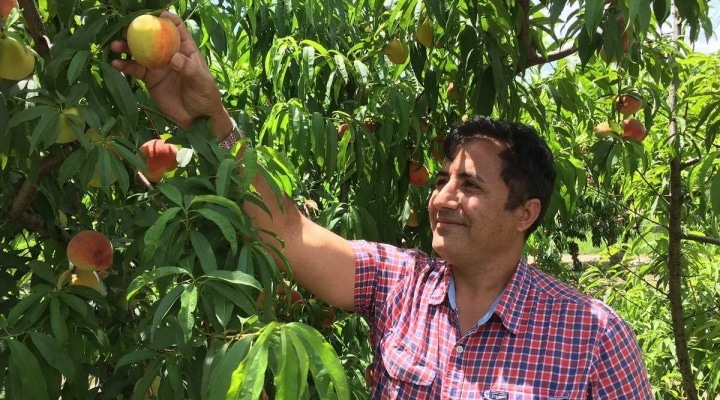 Growers and University of Florida scientists are always concerned about flooding because it can damage peach trees permanently and cause trees to die. As a result of Hurricane Irma in 2017, a few hundred acres of Florida peaches were lost due to flooding in orchards. (photo courtesy, Ali Sarkhosh, UF/IFAS)

GAINESVILLE, Fla. — As you bite into a peach, remember farmers are harvesting the fruit this month and next in Florida.

Those growers and University of Florida scientists are always concerned about flooding because it can damage peach trees permanently and cause trees to die. As a result of Hurricane Irma in 2017, a few hundred acres of Florida peaches were lost due to flooding in orchards.

Flooding poses an issue for all crops, not just peaches. Beyond Florida, 20 million acres of farmland suffered losses nationwide due to floods in 2019, and studies show that floods will increase as climate change continues to challenge growers around the globe, said Ali Sarkhosh, a UF/IFAS assistant professor of horticultural sciences.

“If peach farmers experience flooding, the fruit size and quality can be adversely affected, and the tree may prematurely drop fruit yield,” Sarkhosh said. “We’re searching for flooding tolerance for peaches before a storm wipes out any farms.”

UF/IFAS scientists recently found a few. New research from Sarkhosh and one of his doctoral students shows three peach rootstocks that can survive flooding.

That’s crucial, economically, for American farmers. Nationwide, growers produce about 93,000 acres – about 2,000 of that acreage is in Florida. The southeast, the home of many tropical storms and hurricanes, makes up about 40% of U.S. peach acreage.

Tree fruit such as peaches is often grown using a scion-rootstock system, in which growers can select the best compatible scions (the above-ground portion of the tree) with rootstocks (the below-ground portions of the tree) to fit their operation. Scientists and nurseries join scions and rootstocks by grafting them together.

Sarkhosh leads a lab of graduate students, and together, they study issues faced by the state’s stone fruit and grape growers, including those who plant and harvest peaches. One of his students, Trequan McGee, led recently published research to try to find peach rootstocks with increased resistance to flooding. McGee is a Ph.D. student in the UF/IFAS College of Agricultural and Life Sciences, majoring in horticultural sciences.

In the UF/IFAS-led study conducted in Gainesville, researchers tested six peach rootstocks to see whether they would survive flooding. Researchers measured variables like photosynthesis, nutrient content and activity of the rootstock’s antioxidant system.

“In Florida, peach growers have relied on ‘Flordaguard’ rootstocks, because for years this was the only rootstock available that is resistant to the Florida peach root-knot nematode,” Sarkhosh said.

Damage from flooding translates into visible symptoms like leaf yellowing, leaf drop and eventual death of the scion portion of the crop, Sarkhosh said.

To stay up to date with projects from the UF/IFAS Stone Fruit program, visit the lab’s website or YouTube channel.

DCHA connects with members in person and virtually