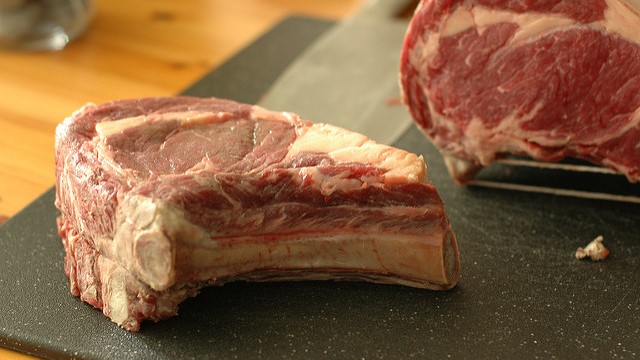 The non-profit Art Institutes operate the largest system of culinary schools in the United States. The tour was held June 25-27, and featured a visit to a cow-calf ranch, feedlot and the JBS beef processing facility in northern Colorado. (Ernesto Andrade, Flickr/Creative Commons)

DENVER — Sixteen culinary experts from across the country got a taste of the beef industry during the Pasture to Plate Beef Tour, sponsored by state beef councils in California, Colorado, Arizona, Oklahoma and Texas. Invited to the beef checkoff-funded event were the culinary chairs responsible for the 28 International Culinary Schools at the Art Institutes across the country. The non-profit Art Institutes operate the largest system of culinary schools in the United States. The tour was held June 25-27, and featured a visit to a cow-calf ranch, feedlot and the JBS beef processing facility in northern Colorado, along with presentations from beef experts that helped the culinary leaders understand beef’s role in a sustainable food system, and ideas for incorporating sensory and beef umami exercises into their classrooms.  Attendees also had an opportunity to participate in a beef cooking competition that demonstrated their culinary talents.

The spark for development of this tour was generated last fall during the California Beef Council’s Beef Leadership Summit, according to the CBC’s Christie Van Egmond, director of retail and foodservice marketing, who helped organize the tour. At that time Dave Hendricksen, the national culinary director for the Art Institutes, expressed interest in giving the Institutes’ culinary leaders more backgrounding in the beef industry.

“This is a great way to connect the next generation of chefs with those that produce the food,” Hendricksen said. He said it was “critical” this type of information gets carried down from the participating culinary leaders to the students in culinary schools studying to be chefs or operation managers.

Standing out to those attending the tour was the well-being of animals throughout the process, Hendricksen said. “The constant theme of this event was animal welfare and the care for the environment,” he said. “It was amazing.”

“This is a valuable partnership that should continue into the future,” said CBC’s Van Egmond. “The beef information and experiences we shared will funnel down through the curricula in the Art Institutes culinary schools nationwide. Just as important, the relationships we’re developing are an important component of our beef checkoff efforts to build stronger bonds with those who have an impact on beef demand.”

Cleanup underway at farm where spill led to fish kill