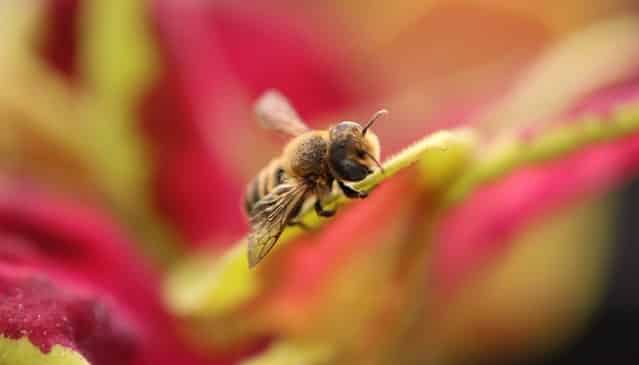 Researchers at the Edward T. Schafer Agricultural Research Center in Fargo have found that the amount of food provided to honey bee larvae is a major factor in determining whether they develop into queens or workers. Previous studies have focused on the importance of specific compounds or the ratio of key nutritional factors in the development of new queens and workers. But the study published this spring by ARS researcher George Yocum and his partners at North Dakota State University (NDSU) is the first to show that the amount of food provided is also important.

In another study, Yocum, ARS researcher Joseph Rinehart and NDSU researchers found that alfalfa leaf cutting bees prefer cooler, north-facing cavities when they select nesting sites among the honeycombed openings available in the manufactured boxes that serve as homes during the June to September pollinating season. The little leafcutters are not as widely used for pollinating crops as honey bees, but alfalfa growers rely on them to pollinate flowers and provide a fresh supply of seeds once every three years. These bees are considered vital to sustaining alfalfa, which is an $8 billion crop in the United States. They also are used to pollinate canola and other specialty crops.

The box openings faced four directions, but the results showed leafcutters preferred to nest in the cooler, north-facing cavities over those that faced south. The iButtons showed that temperatures inside the north facing cavities reached 107 degrees (F) over the summer, while those facing south climbed to 115.7 degrees (F).

“It becomes a question of how quickly the cavities warm up and how much they warm up when the sun hits them,” Rinehart said.

In honey bee colonies, nurse bees provide larvae with glandular secretions called jelly that supply the nutrients needed for growth and development. It has long been thought that quality differences between royal jelly, which is fed to queen-destined larvae, and worker jelly controlled whether larvae turned out to be workers or queens. But nurse bees also are known to provide queen larvae with more food than workers throughout their development.

In their study the researchers fed honey bee larvae nine different amounts of jelly with the same qualities each day. They then took precise measurements of the anatomical traits, such as the mouthparts, of the bees that were produced. They found that the larvae given more jelly – regardless of its quality – were more likely to become “queen-like,” with larger mouthparts and other traits associated with queens, than the larvae fed less generous portions.

“There might be something special in the royal jelly, but we now also know that the quantity of food provided is a factor that should be considered in any discussion of queen development,” Yocum said.

Agricultural perspectives given on climate legislation