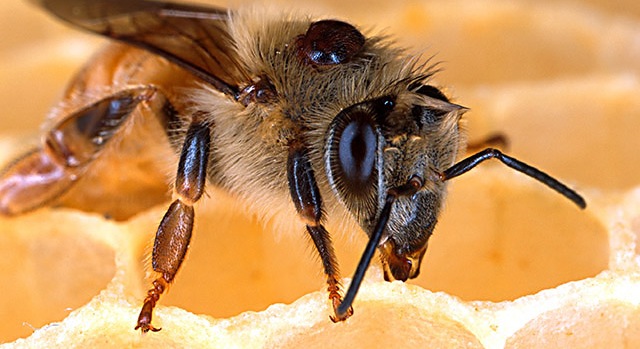 The deadly parasitic Varroa mite on the back of this honey bee is one of many insect pests that sugar esters may be useful in controlling. Sucrose octanoate, a sugar ester, can kill the mite without harming the bee. (Photo by Scott Bauer)

Cook, with the Bee Research Laboratory, a part of ARS’s Beltsville (Maryland) Agricultural Research Center, will be the principal investigator of a group that will include scientists from the United States, Canada and Spain. ARS is the in-house research agency of the U.S. Department of Agriculture (USDA).

The researchers will be screening a variety of chemical compounds for their ability to controlVarroa mites with minimal damage to honey bees on an individual and colony level. Laboratory and field studies will be conducted at facilities in Alabama, Georgia, Maryland and Ohio, as well as in Alberta, Canada.

In laboratories in Nebraska and Spain, scientists also will be using advanced methods to work out an understanding of the molecular mechanisms by which Varroa mites develop resistance to various chemical controls.

Improving knowledge of such mechanisms would provide a better guide to researchers and narrow the field in the future for selecting chemicals worth screening as new control agents forVarroa mites.

The largest single grant for this project is an award of $475,559 to Cook from the Pollinator Health Fund established by the Foundation for Food and Agriculture Research (FFAR) in response to the agricultural threat posed by declining pollinator health. Other funding is coming from participating universities, Project Apis m. and in-kind support from a number of regional beekeepers.

The Honey Bee Health Coalition, a diverse network of key groups dedicated to improving the health of honey bees and other pollinators, also will provide their expertise to facilitate the researchers’ efforts.

Insect pollinators contribute an estimated $24 billion to the U.S. economy annually, according to FFAR. Honey bees specifically pollinate about 100 crops in the United States. Varroa mites have become resistant to many commercially available chemical control agents in recent years.