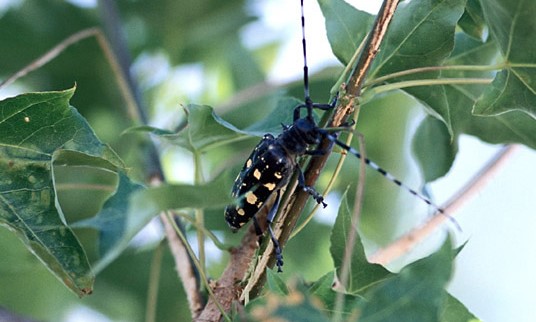 WASHINGTON — April 5th marked the 100th anniversary of the European Biological Control Laboratory (EBCL), operated in Montpellier, France, by the Agricultural Research Service (ARS) to find, describe and evaluate natural enemies of invasive pests and weeds that arrived in the United States from abroad.

The lab was established in Auch, France, in 1919 to find natural enemies of invasive insects originating in Europe, Eurasia and Africa. In 1959, the lab added invasive weeds to the mission of its Rome, Italy, substation. Overtime, the lab moved from Auch to Hyères, then to different locations around Paris. In 1991, it was relocated to the outskirts of Montpellier, a coastal city in southern France.

An original impetus for establishing the lab in 1919 was to find predatory insects or parasites that could biologically control (attack) the European corn borer, an invasive pest whose U.S. arrival wreaked havoc on farmers’ corn and other crops. The EBCL’s list of biological control targets has since expanded to include the likes of the Brown marmorated stinkbug, Bagrada bug, Olive fruit fly and Asian long-horned beetle. French broom, Yellow star thistle, Ventenata, Medusa head and Giant Reed are among invasive weeds being targeted.

“The rise in global commerce and travel has increased the risk of invasive species entering the United States from abroad—and vice versa,” noted ARS Administrator Chavonda Jacobs-Young. “Today, we celebrate the EBCL for 100 years of scientific excellence as a vanguard facility whose research on natural enemies helps mitigate the harm invasive species can cause to our crops and native plants and animals.”

Dr. Jacobs-Young said the EBCL is a strategically located facility where natural enemies collected from their hosts’ points of origin can be studied, reared, tested, packaged and shipped to stateside cooperators. Upon arrival, candidate biocontrol agents undergo additional testing to ensure their safety, host-specificity and effectiveness prior to their release against targeted hosts.

Following the centennial event today, attendees took a guided tour of the EBCL, 19,375-square foot facility located on a 2-hectare (4.9 acre) plot on the Campus International de Baillarguet, which is part of AGROPOLIS INTERNATIONAL, the largest European center for agricultural research and training. EBCL staff also discussed ongoing projects and accomplishments, including:

The EBCL team, which consists of scientists and other staff from the United States, France and Greece, draws on an international network of collaborators.

“Invasive weed and insect species have no barriers,” noted EBCL Director Dawn Gundersen-Rindal. “Pests native to other countries can become United States pests and the reciprocal, so we all benefit by forming strong international partnerships to collaboratively seek biological solutions to problems that may affect us all.”