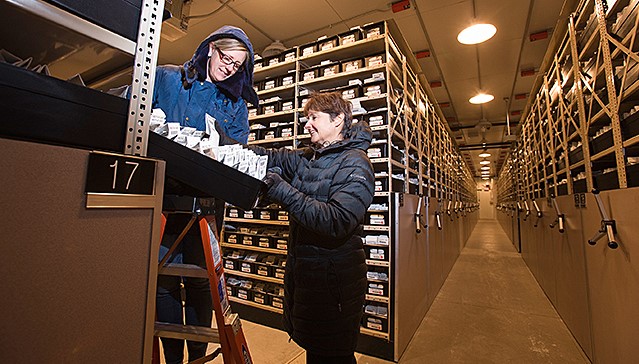 WASHINGTON — A national collection of plant seeds, now used to restore degraded habitats, could also be tapped for other purposes, including breeding better food crops, forages, ornamentals, industrial crops, and livestock feed, according to an assessment by Agricultural Research Service (ARS) scientists in Colorado.

Stephanie L. Greene’s assessment of a highly regarded Bureau of Land Management (BLM) collection of seeds shows that the seeds also could potentially help in developing new ornamentals and plants with medicinal value.

The BLM’s Seeds of Success (SOS) collection, started in 2001, has been previously evaluated for its capacity to restore degraded habitats. But the analysis by Greene and her colleagues at the USDA-ARS National Laboratory for Genetic Resource Preservation in Fort Collins is the first study to examine its potential value to agriculture. Their results are being published this month in the journal Crop Science.

The SOS collection is the result of a collaborative effort designed to increase the supply of native plants available for restoring habitats damaged by wild fires, droughts, and other natural causes. The BLM has worked with dozens of partners over the years to build it up and it’s been recognized by the United Nations for its role in restoring biodiversity to landscapes. It includes seeds from more than 4,760 species, representing almost 30 percent of the native plant diversity in the United States. Seeds have been collected from 44 states, and about one fifth of them are wild relatives of major and minor crops.

Once the seeds are collected and cleaned, they are sent to ARS, catalogued in the ARS Germplasm Resources Information Network (GRIN)-Global and as such, made available, free of charge, to any scientists, researchers, or plant breeders who request them.

In their study, the researchers characterized the potential uses of 23,577 accessions, or samples of the plant populations that can be produced by the seeds and are recorded in the BLM database. They also reviewed the types of requests for those accessions from 2006 to 2018 to determine how researchers, scientists, and breeders have been using them. Anyone requesting seed is asked for a justification on intended use.

Greene and her colleagues found that almost a third of the samples from the SOS collection were from plants with some potential agricultural use, either as ornamentals, or for food or food related purposes, medicinal purposes, forage and feed, or industrial or material uses, such as rubber production. Seeds categorized as being potentially useful as ornamentals, for instance, include roses, penstemon, and cone flowers that grow in harsh environments, which could be used in breeding programs. Seeds having food or food-related uses included blueberries, blackberries, and raspberries.

Researchers and plant breeders are already incorporating seeds from the collection into genetic and botanical studies and in the development of new plant varieties, according to Greene and her colleagues. The researchers found that the top three reasons for requesting seeds were plant genetic studies; botanical, and taxonomic investigations; and development of new plant varieties.

More information can be found here.

Apply for the ASA soy scholarship