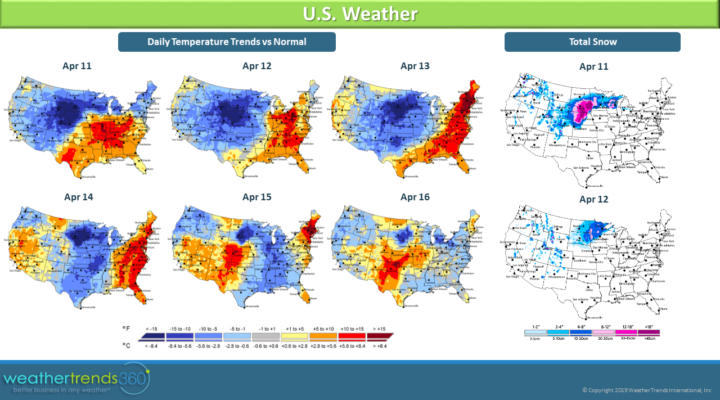 The return of warmer trends will aid in melting the snowfall received this week but will likely cause additional flooding for areas that have already been battling high waters this spring.

WASHINGTON — The potential for snowfall and even blizzard conditions in portions of the Northern Plains and Upper Midwest that we mentioned last week did indeed materialize and are expected to continue to impact the region into Friday. As of Thursday morning, 4/11, a wide array of watches and warnings were up from northeastern Colorado and northwestern Kansas north to eastern North Dakota and across through Wisconsin. As of writing, Blizzard Warnings are in place for much of Nebraska and South Dakota, and a portion of southwestern Minnesota. Winter Storm Warnings and Winter Weather Advisories cover the remainder of Minnesota and much of Wisconsin. While spared from the wrath of winter’s last hurrah, the remainder of the Midwest is expected to receive gusty winds today, prompting Wind Advisories for many. In terms of snowfall, South Dakota and western Nebraska are expected to see the highest totals, with widespread one to two plus feet of snowfall possible.

Cold air has already spread across the Northern Plains and Upper Midwest with temperatures trending more than 15F below normal for some. The remainder of the Midwest, the South Central, and the Southeast, meanwhile, continue to experience spring-like weather with conditions trending generally 5-10F above normal for Thursday. By Friday, cooler than normal temperatures will push further east, covering much of the country west of the Mississippi River. Although the East Coast will trend warmer to much warmer than normal through the weekend, the central US will continue to trend cooler than normal. By early next week, warmer trends return to the Plains and highs will rise into the 50s or higher across much of the Northern Plains and Upper Midwest. 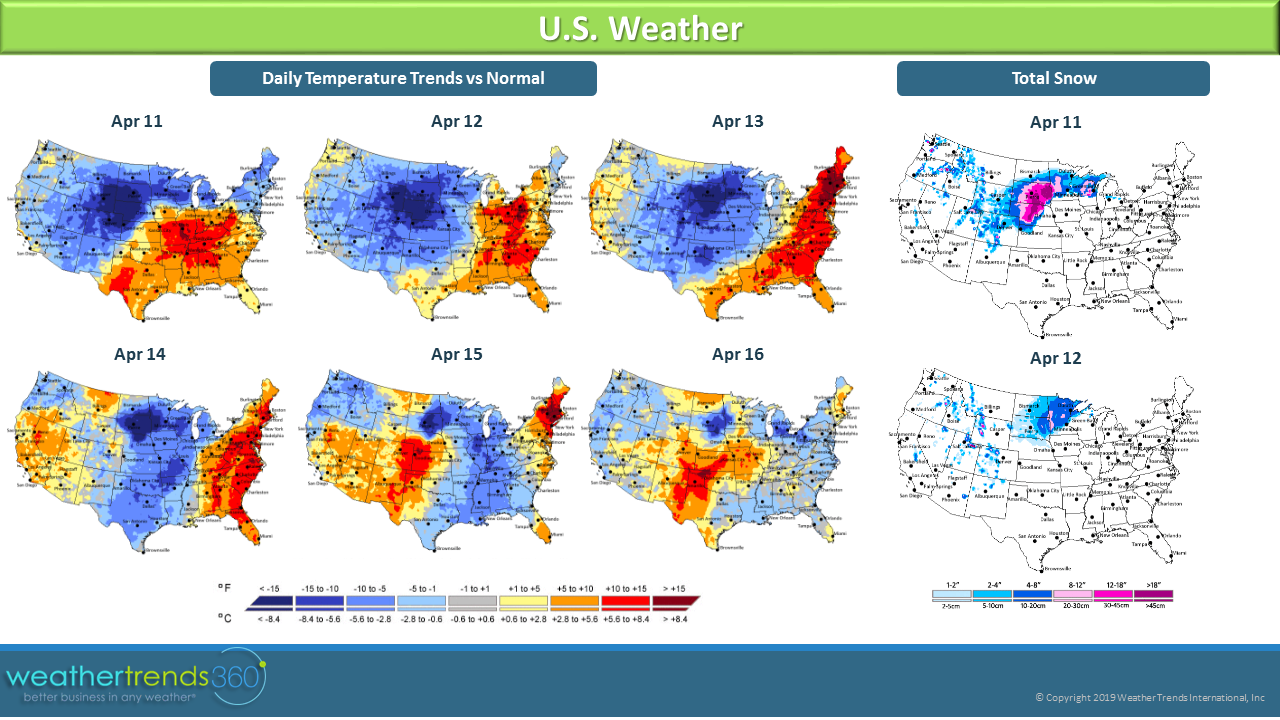 The return of warmer trends will aid in melting the snowfall received this week but will likely cause additional flooding for areas that have already been battling high waters this spring. The timing of this springtime snow storm and its subsequent melting will cause more problems for the agriculture industry in the area. Cold and snow could cause issues for cattle, especially with calving season ongoing, and melting snowfall and flooding could cause issues for row farmers as fields remain over saturated. Over the weekend and into early next week, precipitation in these areas is expected to trend drier than normal which will certainly be welcomed but will not have any drastic positive effects on conditions.

For states further south, corn planting is already starting to get underway. As usual, Texas is the first to start planting and the most advanced with just over half of the crop already planted. Tennessee has the second most corn planted as of last week, with 8%. North Carolina, Missouri, Kansas, and Kentucky each have a very small percentage of their crop already planted as well. By the end of the month, all of the key corn producing states typically begin planting, as dictated by the 5-year planting average, but it is very likely that states such as Minnesota, the Dakotas, and possibly Wisconsin could see a delayed start to the planting season following this April storm.

Vietnam bans the importation of glyphosate