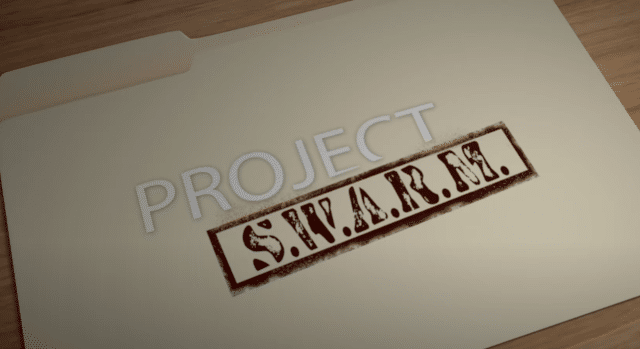 Project S.W.A.R.M. — Strategic Widespread Agricultural Response Management Simulation — is an effort to develop a game-based learning tool to help teach those in agriculture the strategies needed to prevent and respond to an extreme animal disease outbreak. The project recently released its first trailer. The trailer outlines what such a tool might look like and how it can help producers. (Courtesy Photo)

COLLEGE STATION, Texas — Fifty years ago, the strategy-based game Oregon Trail hit classrooms around the country. Anyone who has played the game knows that crossing a river in the wrong place at the wrong time or other poor decisions along the trail can end the game.

A partnership project from Texas A&M AgriLife and the Texas A&M University College of Architecture aims to harness the teaching power of game-based learning and apply it to animal disease preparedness. This could provide those involved in animal health the opportunity to learn from mistakes in a digital world rather than suffer consequences of bad decisions in the real world.

Project S.W.A.R.M. — Strategic Widespread Agricultural Response Management Simulation — is an effort to develop a game-based learning tool to help teach those in agriculture the strategies needed to prevent and respond to an extreme animal disease outbreak. The project recently released its first trailer. The trailer outlines what such a tool might look like and how it can help producers.

“Agriculture, the food production system, and human and animal health is an extremely complex system,” said Jimmy Tickel, DVM, Institute for Infectious Animal Diseases. “It has become global and has a lot of factors to consider. Conventional training cannot track all those factors, but a computer program can. This project is trying to give agriculture a much more complex and adaptive preparedness training tool.”

The project is a partnership project between the Institute for Infectious Animal Diseases, a unit of Texas A&M AgriLife; the College of Architecture’s Learning Interactive Visualization Experience, LIVE, lab; and the U.S. Department of Homeland Security’s Countering Weapons of Mass Destruction Office.

Per capita available calories data from the U.S. Department of Agriculture Economic Research Service shows roughly a third of the calories available to Americans come from animal sources. They come in the form of meat, eggs, dairy products and animal-derived fats. They also represent $194.98 billion in value in the nation’s economy, according to the 2017 Census of Agriculture.

Most of the world’s most virulent and economically devastating animal diseases have not made it to the U.S. or have not been in the country for a very long time. For example, foot and mouth disease, which can infect cattle, pigs, sheep and goats, has not been reported in the U.S. since 1929. Rigorous, ongoing efforts from government groups like the USDA; Customs and Border Protection and the Department of Homeland Security, as well as various Texas A&M University and Texas A&M AgriLife groups, have helped keep foot and mouth disease out of the U.S.

However, the fact that these diseases are not in the U.S. presents its own problem when it comes to preparing for them.

“How do you get people to fully engage in something they have not yet lived through — and maybe think they won’t ever experience — so they have knowledge about dealing with it as though they had lived through it?” asked Tickel. “You put them in a game and let them live through it that way.”

The power of game-based learning

Game-based learning is a fully interactive learning experience where participants can experiment, problem-solve and get immediate feedback on the results of their choices, according to André Thomas, director and founder of LIVE Lab. Thomas said educational games should find more use in classrooms everywhere.

The LIVE Lab has applied the power of game-based learning to the needs of Texas A&M students. Additionally, the LIVE lab utilizes grants and donations to provide undergraduate and graduate students with paid opportunities to work on educational games.

In 2017, the LIVE lab released Variant Limits, a game aimed at helping calculus students better understand calculus in a hands-on way. A 2018 research project found that calculus students who played the game scored higher on their tests than those who did not.

Thomas explained that game-based learning in the form of educational games is nothing new and even predated the modern video game industry. He pointed to the example of Oregon Trail from 1971 and that even the ancient Greeks even used learning games.

Applying game-based learning to in-person disaster preparedness training is also nothing new. Similarly, tabletop exercises have existed for animal disease preparedness as well. The World Organization for Animal Health even has guidelines on conducting such simulations.

What is new, Thomas said, is applying those concepts of in-person game-based learning for animal disease preparedness in a digital game that can be played by anyone as often as participants want.

“Every game is a simulation but made more engaging and fun,” Thomas said. “And you can try again. Most in-person simulations you just get to do once.”

Games, failure and the future of animal disease preparedness

Failure can be a good teacher, Tickel said. But failure in the real world when it comes to animal diseases could have devastating consequences for producers and their animals. A game could allow producers, lawmakers and even the public to work through scenarios and learn from failures before a real animal disease disaster happens.

“A conventional exercise lets you try one idea and then you are done,” Tickel said. “You are likely not to have exercises repeat themselves; they’re just one offs. But a game allows players to sit down and continue to play through scenarios and test to their hearts’ desire. As many failures as they would like.”

Sarah Caffey, former IIAD program director, explained that the ability to fail safely is enormously important to the learning process.

“In a game, failure helps you learn, and you can quickly start over to try a different approach to see if it works better,” she said. “An agricultural disaster is going to be very complex and very stressful when the real thing happens. If you can practice ahead of time in a game environment, to know what works and what doesn’t, you’ll be more prepared to do it right when the real time comes.”

“Using a game allows people to control aspects that they normally would not in a traditional exercise. They get an idea of the bigger picture and understand why they are doing what they’re doing,” he said.

Caffey added that games are unique in that they can present a player with complex information with direct feedback.

“Games can help them evaluate the interconnectedness of different topics quickly and more holistically than traditional exercises or trainings,” she said.

The future of Project S.W.A.R.M.

Creating a well-researched, effective educational game takes time and a playable game is still a long way off. Project S.W.A.R.M. is an early stage step in the effort to create a full animal disease preparedness training tool. Past efforts included the creation of a board game as a sort of proof-of-concept research tool.

“We were able to incorporate a lot of important preparedness activities into the prototype, make a gameplay structure and have people sit down and play it and get a feel for it,” Caffey said. “We were able to show that this could work.”

From there, LIVE Lab began work on a digital prototype and the explainer trailer that was released on Aug. 31. Tickel said the trailer will help convey the game-based learning concept to people who may be or may not be familiar with video games and game-based learning.

Next steps include creating “digital vertical slice” — a working proof of concept of the digital game — to give potential funders and players a look at what the finished game might be. After that would be a working prototype digital game that could be played and tested.

Ultimately, the goal of Project S.W.A.R.M. is to create a digital game-based learning experience for the desktop computer that could be played by anyone.