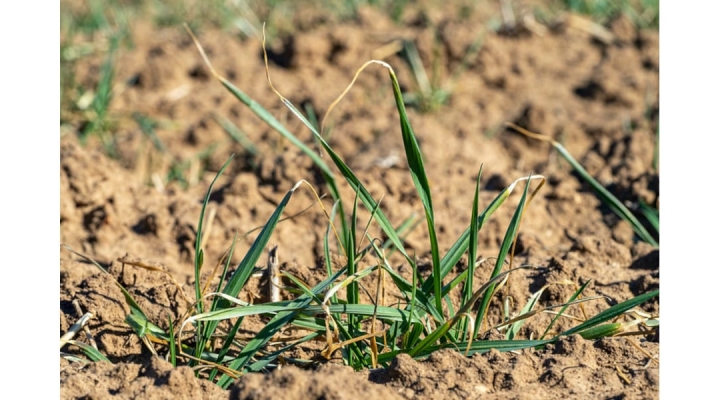 Green wheat, stunted by drought, struggle to climb out of the dry soil in early 2022. (Photo by Todd Johnson, OSU Agricultural Communications Services)

STILLWATER, Okla. – The effects of drought are devastating, but agricultural data collected during such challenging times is a valuable teaching tool.

Oklahoma State University Extension specialists have some retrospective on the historic drought that swept through the plains a decade ago and are learning how it can benefit producers in today’s similar climate.

“The drought led to aggressive culling, resulting in more rapid progress in some traits, such as temperament, udder structure and productivity,” Lalman said. “At the same time, severe drought conditions stimulated widespread interest in creating a cow herd that is a better match to local ranch conditions.”

Those conditions, in terms of precipitation, have been well above average since about 1983. From the consumer perspective, cattle are a lot better than they were 30 years ago.

“The industry had successfully selected for cattle with increased growth, carcass weight and marbling, but it wasn’t as focused on matching cattle to their forage resources. The 2011 drought changed all that,” he said.

Keeping cows that can adapt to their environment, particularly a dry climate, is important in tough years, Lalman said. Other takeaways from the last severe drought period include:

“I don’t care how much genetic potential their calves have for growth, carcass yield or marbling, if a cow doesn’t raise a calf, you don’t have a carcass to sell,” Lalman said.

“I think 2011 and 2012 made an impression that will last,” Lalman said. “A lot of serious producers took note and are better prepared today with cows that are a better match to their environment, improved grazing systems, a lower stocking rate and an emergency fund of good quality hay stored in a barn. There’s just a lot more people taking precautions.”

Brett Carver, OSU regents professor and wheat genetics chair, said it’s a survival of the fittest as he and the OSU Wheat Improvement Team sift through thousands of wheat genetic lines every year to develop new varieties. OSU research showed the germplasm Showdown stood out during its formative years when drought was a major factor.

“From 2011 to 2014, Showdown as an experimental line was drought resistant by nature, and those genetics are fixed. They don’t change,” he said. “Showdown packs a punch against drought.”

While Showdown shows potential as a drought-friendly wheat variety, Carver said wheat breeding involves studying varieties that can withstand a range of intense weather patterns, including the wetter years in which disease epidemics can be equally devastating as chronic drought stress.

“There’s no model genotype for what we’ll need 10 years from now,” he said. “We give a variety five years of testing once it’s been identified and look for maturity and adaptation patterns that fit both extremes.”

Novus prepares to Scale Up milk at WDE