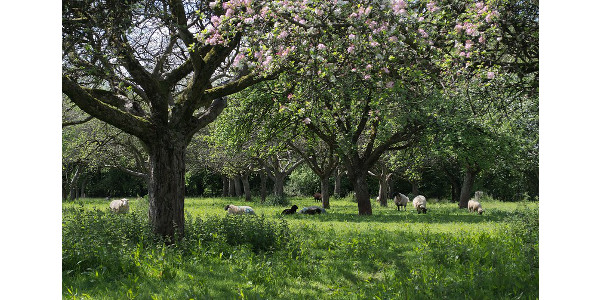 Apple blossom time is here, and Michigan Apple growers continue their work to ensure a strong crop for the 2020 harvest. (Alison Day via Flickr)

LANSING — It is one of the most beautiful and fragrant times of year in Michigan. Apple blossom time is here, and Michigan Apple growers continue their work to ensure a strong crop for the 2020 harvest.

“Along the Fruit Ridge area of Michigan, just north of Grand Rapids, apple trees will be in full bloom by this weekend,” said Diane Smith, executive director of the Michigan Apple Committee. “The freezing temperatures from earlier this month only caused minimal damage and we are hearing confidence from growers and the industry that Michigan will produce a healthy crop of apples this fall.”

Growers battled freezing temperatures over three nights in early May to protect their crops. Temperatures descended into the low 20s, and growers employed frost fans, sprinklers, fires and other methods to keep temperatures up in the orchards.

“After the crop loss in 2012 Michigan Apple growers made significant investments in frost protection equipment,” said Smith. “That preparedness served them well this year as they were well-equipped to fend off the freeze damage. One grower commented to me that over one night his frost fan paid for itself.”

According to Amy Irish-Brown, MSU Extension Educator, a cold start to spring and the great climate in Michigan (including lake effect buffering of the harsh conditions) kept trees delayed in development, providing more protection from the cold.

Irish-Brown says southwest Michigan saw more damage in their apple blossoms, as they were farther along in bud development and it was colder there during the freezes. Northwest Michigan is several days behind downstate and it is simply too early to tell if any damage took place. The Fruit Ridge, which is responsible for approximately 75 percent of Michigan’s apple production, saw less damage.

“My colleagues and I feel good about saying we still have 95 percent of a crop. Certain varieties were hurt more than others, which is expected for varieties that are always more sensitive to cold damage – Red Delicious, Jonagold, Fuji – but some sites even have decent crops of these, so the damage is quite variable,” she said.

Michigan Apple growers harvest an average of approximately 25 million bushels of apples each year. There are more than 14.9 million apple trees in commercial production, covering 34,500 acres on 775 family-run farms in Michigan.