Home » Apple crop off to a good start 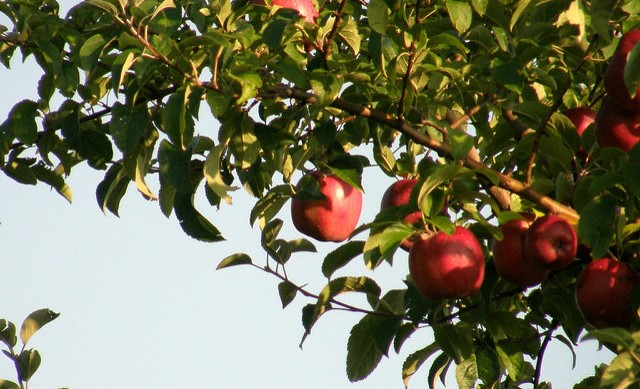 Vermonters and visitors to the state harvest about 20 percent of the state’s crop, about 200,000 bushels. (fauxto_digit, Flickr/Creative Commons)

MONTPELIER — Despite the late, cool spring and the unusually warm and dry summer, Vermont’s 2018 apple crop is expected to be similar to that of 2017. “This looks to be another solid year the state’s apple crop,” confirmed University of Vermont Tree fruit Specialist Dr. Terence Bradshaw, “apples are a pretty resilient crop and the recent rains and outlook for cool nights in the next ten days should really advance ripening and fruit size.”

Many Vermonters still relish the idea of picking their own apples. Vermonters and visitors to the state harvest about 20 percent of the state’s crop, about 200,000 bushels. Much of the apple growers’ marketing efforts focus on the pick-your-own and farm stand markets. This year, the growers’ organization began a new “Apples to iPads” campaign, enticing younger visitors and their families to visit orchards to find a wooden apple to be redeemed for an Apple iPad mini 4 in 16 pick-your-own orchards located across the state. This promotional program checks a lot of important boxes about teaching the next generation about where their food comes from, buying local and making healthy eating choices. Consumers looking for orchards to visit this fall can find a full listing at the apple association’s website, www.vermontapples.org.

Vermont’s apple crop has held steady at about 1 million bushels (about 40 million pounds) for much of the last 20 years. While the state’s large agriculture sector is associated with dairy and maple, apples are it’s third most-valuable crop. Since the 1990s, the proportion of the state’s production sold locally has increased, but over 60% of the crop is still marketed outside of the state as far away as Florida.

Vermont orchards grow more than 150 varieties of apples. The McIntosh remains the most important apple grown in Vermont, accounting for about 50 percent of Vermont’s apple crop. Newer popular apples like the Honeycrisp and Gala are moving up the ranks, but have a long way to go before catching the McIntosh.

Squirrels chow down on farmers' crops