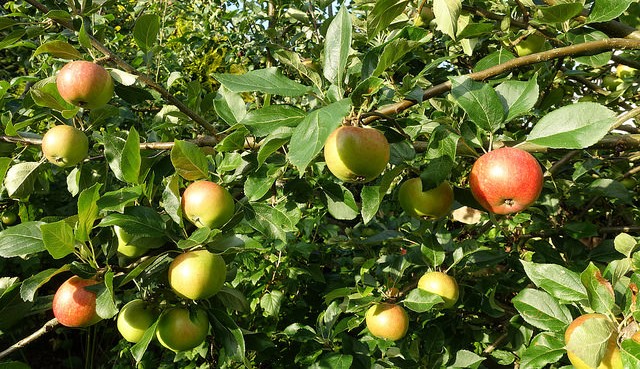 The story begins in 1998 when Washington State University professor Bruce Barritt crossed the Honey Crisp and Enterprise to create the Cosmic Crisp, named in part for the lenticels on its bright red skin and its crunchy texture. (Stock image of apples via Tejvan Pettinger, Flickr/Creative Commons)

YAKIMA, Wash. (AP) — It’s an apple that could upset the cart. Or at least disrupt it a bit.

Washington growers are so excited about the Cosmic Crisp’s potential, they already planted a half-million trees and plan to add another 5 million this year.

Consumers will have to wait until fall of 2019 before these new apples hit the marketplace. But behind the scenes, there’s a courtroom battle brewing between one of the state’s major universities and a Seattle agricultural technology company over who has the right to sell the trees.

But whatever happens, it’s not dampening growers’ enthusiasm for what they see as a game-changing variety of apple.

“I’m excited to see how it will disrupt the apple market,” said Mark Hanrahan, a Buena grower who has planted the trees.

The story begins in 1998 when Washington State University professor Bruce Barritt crossed the Honey Crisp and Enterprise to create the Cosmic Crisp, named in part for the lenticels on its bright red skin and its crunchy texture.

But its qualities are more than skin deep.

“It has great flavor, very juicy,” said Phil Weiler, WSU vice president for marketing and communication. “From a retailer’s perspective, it has a great shelf life. It can be stored for a year or more” without losing flavor or texture.

The apples could be worth a fortune. Many consumers, long weary of Washington’s once standard Red Delicious, have shown they are willing to pay more for new and better fruits. At one Yakima Valley store, Honey Crisp apples are sold for three times as much as Red Delicious. Growers are expected to produce 175,000 boxes of Cosmic Crisps in 2019, with projected crop yields of 13.5 million boxes in 2023, Brandt said.

Hanrahan said Cosmic Crisp represents a coordinated effort between the fruit industry and the university in developing and marketing a new variety.

The apple’s development was financed in part by a group of Washington apple growers, who in return will have exclusive right to produce Cosmic Crisps for at least 10 years in North America starting in 2019, Weiler said.

Among those preparing to plant this year is Scott McIlrath, a Naches area grower.

“It has a lot of potential,” McIlrath said, noting its long shelf life.

As with many new products, there are bumps in the road.

To meet the expected demand for trees, WSU went to Phytelligence, a Seattle-based company that was earlier spun off from the university to propagate as many trees as possible.

WSU maintains its contract with Phytelligence allowed it to produce trees, but not sell them. Instead, in 2014, Proprietary Variety Management and Northwest Nursery Improvement Institute (NNII) were given exclusive license to market Cosmic Crisps and provide trees to growers.

But Phytelligence CEO Ken Hunt said his company’s review of the WSU agreement found it had an option to obtain a license to sell trees to growers.

Hunt said the company applied to the university for a license, a request that Hunt said WSU refused to grant, arguing that the option did not exist.

“Nobody sent us a license,” Hunt said.

But WSU said in court papers that Phytelligence was told it could obtain a license if it became one of NNII’s member nurseries, a move it said did not happen.

In court documents, Phytelligence said NNII was unwilling or unable to give it criteria for joining the group.

WSU alleges that Phytelligence sold 135,000 trees without permission, and refused to account for them.

There’s concern the trees could be grown out of state in violation of WSU’s agreement with apple growers and unauthorized growing could endanger the marketing, Weiler said.

“If someone is selling unlicensed versions of the apple, it may have a different quality than the public would expect,” Weiler said. “If there is some inferior version of the product, people may skip the Cosmic Crisp.”

But Hunt said the company did not sell trees to anybody. He said that the company entered into an agreement with a grower as it was seeking a license, but when the license did not come through, the order was canceled and the money returned.

Phytelligence struck first, filing suit in King County Superior Court in February for breach of contract, alleging WSU went back on its agreement when it refused to offer the company a license.

The suit seeks to have WSU grant a license to Phytelligence to market trees.

Hunt said WSU still has shares in Phytelligence, and allowing it to exercise its option would benefit the university financially, as well as help it meet the demand for the trees.

WSU has filed a countersuit in U.S. District Court in Seattle, alleging that Phytelligence infringed on the patent for Cosmic Crisps and violated its contract by not obtaining a license for selling trees. It seeks damages, as well as a court order barring the company from what it says are further infringements of the patent.

“From our perspective, that was not a place we wanted this to end,” Weiler said.

“We wanted it to end amicably, but it did not end that way. We tried to make sure we could get them back into compliance, but they were not willing to meet us halfway.”

But Weiler and others say the ongoing litigation will not stop the plans to bring the Cosmic Crisp to market.

“The lawsuit is not inhibiting the product,” said Lynell Brandt, a Yakima-area grower and president of Proprietary Variety Management. He said most growers have either planted or are planting Cosmic Crisps.

Weighing the importance of NAFTA vs China

US may offer $1,000 for adopting wild horses