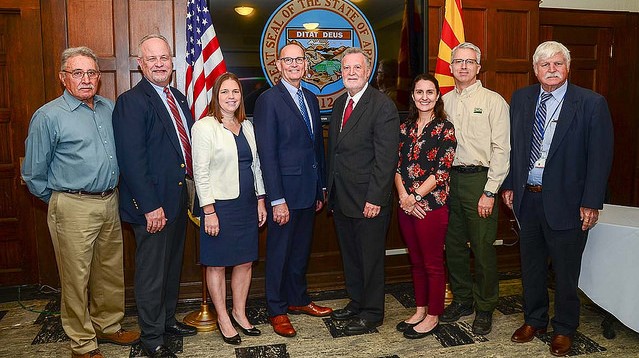 WASHINGTON — The United States Department of Agriculture’s Animal and Plant Health Inspection Service (APHIS) is celebrating the agency’s many successful efforts over the past year in support of USDA’s goals by protecting American agriculture, natural resources, and by enforcing the Animal Welfare and Horse Protection Acts.

“Our employees protect our nation’s farmers, ranchers, and citizens in many ways – by keeping foreign diseases and pests out of the United States, helping maintain and increase export markets, preventing air disasters caused by birds flying into airplane engines, and ensuring that animals used in research or bred for sale as pets are treated humanely,” said APHIS Administrator Kevin Shea.  “We are meeting Secretary Perdue’s goal of doing right and feeding everyone.  I am very proud of all we’ve accomplished together so far, and I look forward to seeing what we can do in 2019 and beyond.”

Some significant successes this year include eradicating three invasive species, launching a new outreach campaign that provides information on biosecurity to all poultry owners, responding to several new pest and disease detections, and supporting the use of sound science in international trade regulations.

During 2018, APHIS announced the eradication of three different invasive species. U.S. cotton is now free of the devastating pink bollworm thanks to a rigorous program carried out by APHIS and its indispensable partners including State departments of agriculture and cotton growers.  With the eradication, USDA lifted the domestic quarantine for pink bollworm, which relieves restrictions on the domestic and international movement of U.S. cotton and saves producers millions of dollars each year on treatment costs.

APHIS and its partners successfully eliminated feral swine from Maryland and New Jersey.  Three additional States (Iowa, Maine, and Oregon) saw significant reductions in feral swine populations. Feral swine cause major damage to property, agriculture (crops and livestock), native species and ecosystems, and cultural and historic resources. In fact, this invasive species costs the United States an estimated $1.5 billion each year in damages. Feral swine also threaten the health of people, wildlife, pets, and other domestic animals.  Through a strong cooperative effort, we are seeing successes but we must continue our efforts elsewhere in the country.

Considering the devastating impact of the highly pathogenic avian influenza (HPAI) outbreak in 2014-2015, as well as other poultry health issues in recent years, APHIS launched a new outreach campaign in 2018 focused on preventing the spread of infectious poultry diseases in both commercial and backyard poultry.  The “Defend the Flock” campaign to promote biosecurity emphasizes the need for everyone who works with or owns poultry to work together to protect the health of all our poultry flocks.  While the Nation has seen great strides in biosecurity over the past few years, biosecurity is an every day, every time effort.  “Defend the Flock” provides anyone who works with poultry with the awareness, training, and reminders necessary to sustain good biosecurity practices.

In 2018, APHIS was very busy responding to a variety of plant and animal emergencies, protecting the health of our nation’s plant, animal, and natural resources and our ability to export billions of dollars in agricultural commodities.  APHIS responded to several foreign pest and disease detections, including virulent Newcastle disease in California, spotted lanternfly in Pennsylvania and other States, and European cherry fruit fly in New York.   APHIS also provided emergency support to protect pets and livestock during natural disasters such as hurricanes and floods.  APHIS is currently providing support for the California wildfire response, including providing personnel and equipment for animal feeding efforts.

Read more about APHIS’ successes in our end of year accomplishments report.