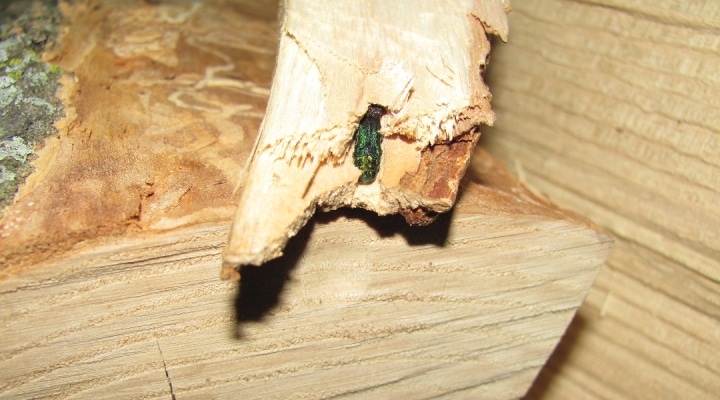 APHIS is working with the National Plant Board on effective strategies to manage firewood movement, which is one of the ways the emerald ash borer spreads. (Pacific Southwest Forest Service, USDA, Flickr/Creative Commons)

WASHINGTON — The U.S. Department of Agriculture’s Animal and Plant Health Inspection Service (APHIS) is changing its approach to fight the emerald ash borer (EAB) infestation that has spread through much of the United States. The Agency is publishing a final rule that removes the federal domestic EAB quarantine regulations that have proved ineffective and will redirect resources to more promising methods.

APHIS has been transparent about the challenges associated with controlling the emerald ash borer and that the domestic quarantine has not proven effective in stopping its spread. The Agency has worked to identify more effective and less intrusive methods and will now direct available resources toward non-regulatory options for management and containment of the pest, such as rearing and releasing biological control agents. Results have already proved effective and the actions announced today will allow the Agency to increase their use.

The final rule and the response to the comments we received will publish in the Federal Register on December 15, 2020 and be rule will be effective on January 14, 2021. Documents may be viewed online at https://www.regulations.gov/docket?D=APHIS-2017-0056 upon publication.

APHIS is working with the National Plant Board on effective strategies to manage firewood movement, which is one of the ways the emerald ash borer spreads.

APHIS’ goal is still to maintain ash in the North American landscape. We look forward to continued collaboration with our partners on this effort. Questions about the regulatory change for emerald ash borer can be directed to National Policy Manager Herb Bolton at 301-851-3594 or Herbert.Bolton@usda.gov.