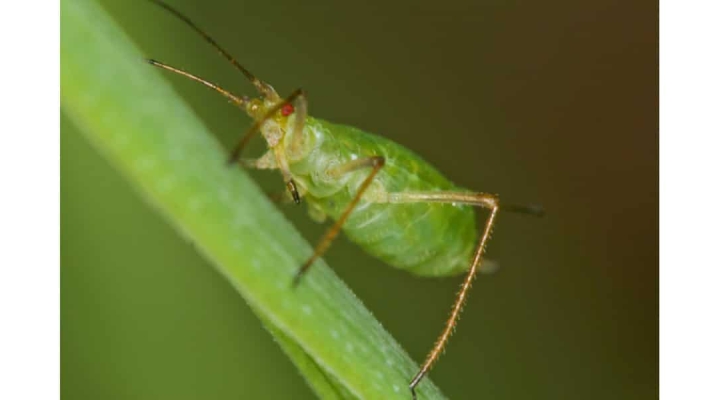 Some Kansas farmers are seeing large populations of cowpea and pea aphids in their alfalfa fields, well ahead of the typical timeframe of June and July. (Photo: Andy Murray, Flickr/Creative Commons)

The aphids, he said, are probably in every field in Kansas, but “we usually do not see this many of them this early.”

He said the cowpea aphid population desnity that producers are seeing now is more typical of June or July, usually with the second or third alfalfa cutting.

“Alfalfa is a good host for beneficial insects, so when we see lady beetles over winter and they start going around feeding they’ll find some cowpea aphids or pea aphids because they arrive early in the season,” Whitworth said.

Because of that, he adds, “I still have a hard time recommending treating for aphids, whether they’re cowpea aphids or pea aphids.”

Whitworth said many producers worry about the honeydew on alfalfa plants that cowpea aphids produce. “If you’re really worried about them, I really don’t think there’s a specific percentage that creates the need for the aphids to be treated,” he said.

If a producer decides to treat for aphids, Whitworth said they may want to consider one of the new insecticides that are labeled for alfalfa aphids.

“If producers leave them untreated, I think the beneficial insects will find them and start helping to control them a little bit,” Whitworth said.

According to Whitworth, spraying for alfalfa weevils will also kill the aphid populations.

He said that a producer should choose to spray alfalfa weevils once the weevils are found on at least 50% of the alfalfa plants.