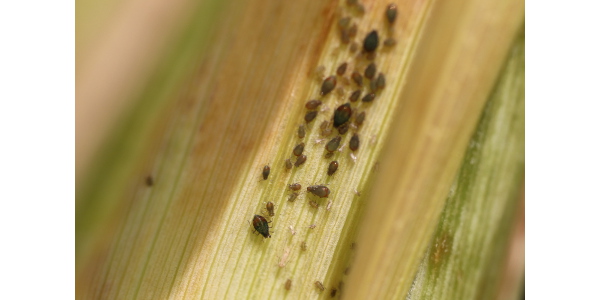 BROOKINGS, S.D. — While scouting corn the last few weeks, we have been noticing several fields containing small populations of aphids. At this point in the season, such aphid populations do not pose a threat to yield. However, this presents an opportunity to discuss when to worry about aphids in corn. The 2017 growing season has been a dry one, which sometimes results in aphid populations having a greater impact on corn. The two species of aphids being observed in corn this season were not present until late August, and have more noticeable populations this month. Aphid populations in corn pose a greater risk prior to hard dent.

The two species of aphids that are being observed are bird cherry oat aphids (Figure 1) and the English grain aphids (Figure 2). Another aphid that may be found in corn is the corn leaf aphid (Figure 3); however, this species has yet to be observed in South Dakota this year.

Bird Cherry Oat Aphid
The bird cherry oat aphid is a dark olive colored aphid that has a burnt orange patch on the end of its abdomen. These aphids tend to colonize the ear, shank, and occasionally the stalk of the plant. Typically, the bird cherry oat aphid doesn’t colonize corn until later in the season. It is possible that these populations are moving in from small grain crops after harvest.

English Grain Aphid
The English grain aphid is a large, bright green aphid that has black antennae, black cornicles (tailpipes), and black patches on its legs. English grain aphids can be observed in corn throughout much of the season, but their peak numbers now may also be a result of small grain harvest.

Although there are not experimentally based thresholds for aphids in corn, recommendations are to manage the populations using insecticides if they exceed 100 aphids per plant. To scout for aphids in corn, a total of 100 plants should be examined throughout the field. Often, the infestations of these aphids are greatest in the end rows of the field. For each plant, examine the leaves, ears, stalk, and shanks for signs of aphids.