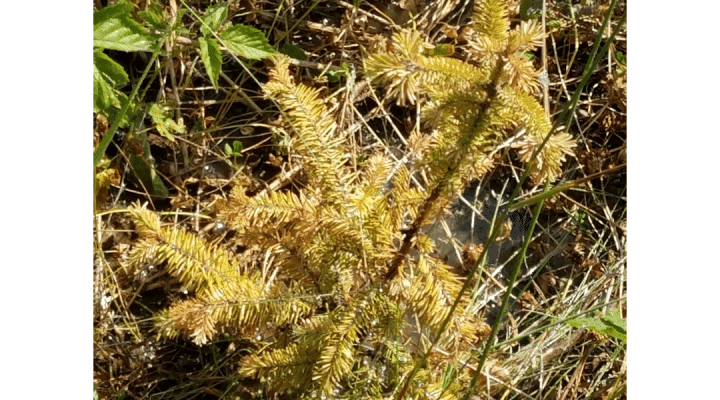 One of the conifer seedlings showing strong symptoms of stress in the third year of the field experiment. The study found biochar negatively affected the trees. (Credit: Jake Nash)

WASHINGTON — Biochar is similar to charcoal and can be added to soil with the goal of improving its quality. It can help increase nutrient and water retention. However, what happens in soil impacts fungi and plants that live there, and it is not always clear how they will react to biochar.

Jake Nash, a researcher at Duke University, helped lead a study to determine how biochar affected microbes like fungi, as well as trees. He explains that biochar can be produced from many things like corn cobs, rice husks or pine wood. It is created through a process called pyrolysis, where the material is heated in the absence of oxygen (which makes it a different process than fire burning).

“Biochar has a very long history of use by indigenous peoples in the Amazon Basin who amended leftover charcoal from cooking fires into the soil,” Nash adds. “This created very rich and deep soils, called Terra preta. Even to this day, these soils are enriched compared to the surrounding soils.”

Much of the current research on biochar was conducted on annual, short-lived crops like corn, wheat, soybeans, and rice. Nash says that less work has been done to find out how biochar impacts long-lived plants like conifer trees, and early results have been very mixed. That’s why Nash’s team set out to evaluate how biochar affected two commonly grown Christmas trees, blue spruce and balsam fir.

Their results showed many changes to the soil, trees, and soil fungi. They found that biochar increased the activity of certain microbes, which help decompose litter and return nutrients to the soil. However, it also had negative effects on the trees.

“These findings show that biochar can affect microbes and plants differently, and we need to better understand how the above and below-ground worlds interact with biochar,” Nash says. “Every biochar is different and needs to be well-characterized before farmers make the decision to use it on their crops.”

The researchers point to changes in soil pH — the measure of how acidic or basic something is — caused by the biochar that negatively affected the trees. Nash says many plants and microbes are very sensitive to pH changes so it may have changed which microbes were able to grow in the soil or affected plant performance, or both at the same time.

They did observe that the biochar increased soil moisture during their tests. This is because biochar can act like a sponge and retain water.

“The biochars that we used were both somewhat acidic, which made the soil more basic after biochar application,” Nash says. “Our results might have to do with biochar’s effect on soil acidity or its effects on symbiotic fungi.”

Interestingly, they found that one species of symbiotic fungus called Wilcoxina mikolae came to dominate plant roots. They want to perform more tests to see why this may have happened and how shifts in fungal communities may have affected tree growth.

“Further testing might show specific tree species that are likely to perform better with biochar,” Nash says. “We might even be able to perform chemical testing on the biochar that will help us make good guesses about how it will perform in the field.”

The researchers say that biochar has the potential to remove carbon from the atmosphere. So, if scientists can understand how to best use biochar, it could be used to both improve soil health and combat climate change.