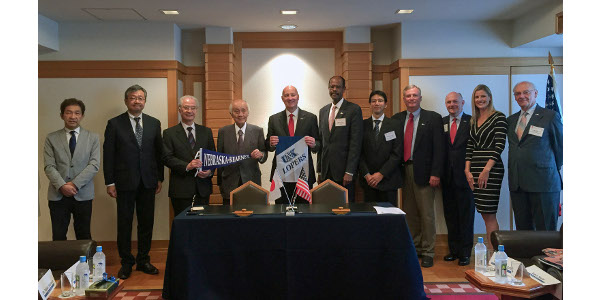 KEARNEY, Neb. — The University of Nebraska at Kearney has a long, successful history of bringing Japanese students to Kearney.

UNK entered its first student exchange partnership with Japan’s Sapporo University in 1983 and today has more than 20 similar agreements with Japanese institutions.

On Tuesday, UNK continued to strengthen its international ties when it signed a five-year agreement with Toyo University during the Midwest-U.S. Japan Association conference in Japan.

The new partnership includes student and faculty exchange between the two universities and focuses on areas such as research collaboration; joint seminars, guest lectures and workshops; sharing of academic materials, publications and information; and other educational programs.

Each year, three undergraduate students can enroll at UNK and Toyo, and get their tuition waived at both institutions.

“This is another opportunity for our students to go abroad, grow their confidence and maturity, and experience personal development. Those are areas where our students really grow after pursuing these types of opportunities,” said Ann Marie Park, assistant director of international education.

UNK has more than 500 international students from more than 50 countries, including 137 Japanese students. UNK offers an academic minor in Japanese, which requires 10 credit hours of introductory Japanese on the UNK campus and a year of studying abroad in Japan, said Park.

That is a “major reason for the history of successful” partnerships between UNK and Japanese universities, Park said.
“Our goal is to bring more international students here, make them aware of UNK and hope they identify a pathway that makes our campus a potential site for them to study one or two semesters,” Park said.

Toyo University is located in Tokyo, Japan, and consists of 11 graduate schools, one postgraduate law faculty, eleven undergraduate faculties and various research institutes, serving a student body of more than 30,000.

“Recruiting international students to UNK is an important piece of our overall globalization strategy,” said Dusty Newton, director of undergraduate recruitment and admissions. “Students from all over the world have been coming to UNK for many years. Sapporo University in Japan was the first university that we developed a formal exchange relationship with, and Japanese students have been coming to study at UNK for nearly 40 years.”