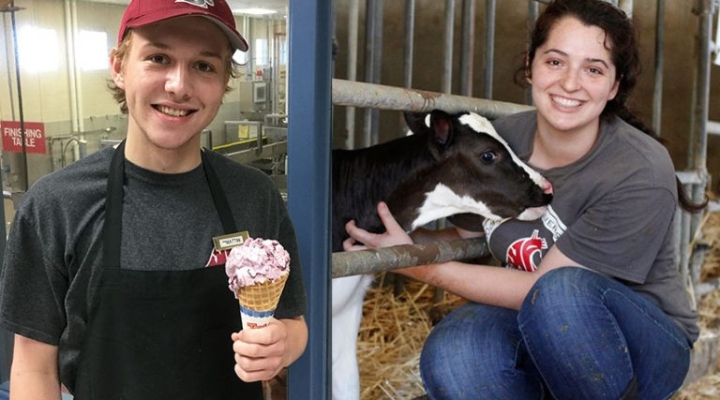 PULLMAN, Wash. — For the fifth time, student-made ice cream from the Washington State University Creamery, made with milk from the university’s student-run dairy, has won the American Society of Animal Sciences’ coveted Big Scoop.

Attendees voted with their spoons at the annual Big Scoop ice cream competition, held June 28, 2022, during the society’s annual meeting in Oklahoma City, Okla. For the second year in a row, and the fifth time for a WSU flavor since 2015, the university’s Huckleberry Ripple flavor took top honors against ice cream samples from several other institutions, bringing the competition trophy back home.

A perennial top seller at WSU’s Ferdinand’s Ice Cream Shoppe, “Huckleberry Ripple is a regionally distinctive flavor that consumers seem to love, as did the judges of the Big Scoop competition,” said Gordon Murdoch, chair of the Department of Animal Sciences, which sponsored WSU’s entry.

The secret to WSU’s success might be in the milk: Cougs are involved in every step of its journey from cow to cone.  WSU’s Knott Dairy Center, founded in 1962, is operated chiefly by students, who learn about the dairy industry while managing a 170-cow herd. Students milk twice a day, delivering nearly half-a-million gallons to the WSU Creamery on the Pullman campus. There, students gain hands-on work experience making 250,000 cans cheeses, including world-famous Cougar Gold cheddar, as well as 22,000 gallons of ice cream annually.

“Top-level animal care, high quality feed, and our dairy genetics combine to yield the ideal ingredient from which the WSU creamery can work its distinctive magic,” Murdoch said. “The pride and the championship title are reflections of our excellence.”

Along with the trophy, the program will receive about around $1,000 in prize money to be used on student activities.

Waterhemp is here, is Palmer amaranth next?

What is sustainable turfgrass?