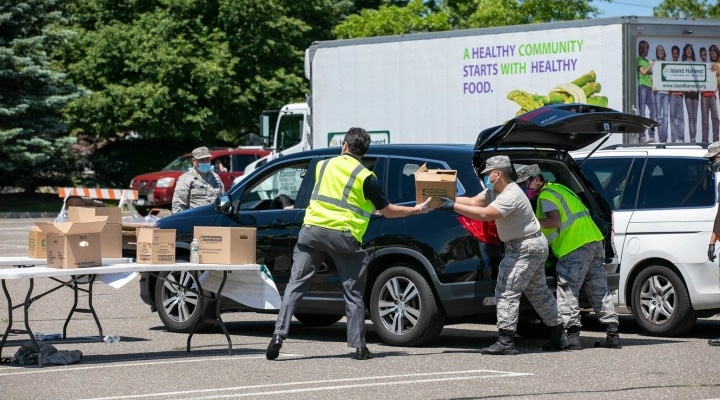 Volunteers from the Civil Air Patrol. Long Island Group, were among those on hand to assist Island Harvest Food Bank in giving out more than 100,000 pounds of food to people struggling with hunger. (Credit: That’s a Wrap Productions)

LONG ISLAND, N.Y. — Island Harvest Food Bank was on hand in Bay Shore recently to give out more than 100,000 pounds of New York state-produced food to 4,200 Long Island families who continue to struggle with food-insecurity resulting from the coronavirus pandemic. The distribution was part of Governor Andrew M. Cuomo’s $25 million Nourish New York initiative that reroutes the state’s surplus agricultural products through New York’s network of food banks and directly to people who have been economically impacted by the coronavirus pandemic.

The Bay Shore event was the second Nourish New York of its kind on Long Island; the first, which was also the first held in New York, was in Massapequa on May 8, 2020, and served more than 3,600 families. Island Harvest Food Bank has received approximately $800,000 through the initiative to procure food produced in New York state.

“For many, it’s a humbling experience to ask for help, and we often hear from people at our distributions that they were once contributors to Island Harvest,” said Ms. Shubin Dresner. “Thanks to Governor Cuomo’ Nourish New York program, we can help meet the nutritional needs of our neighbors struggling to feed their families, with the added benefit of supporting the state’s commercial food producers.”