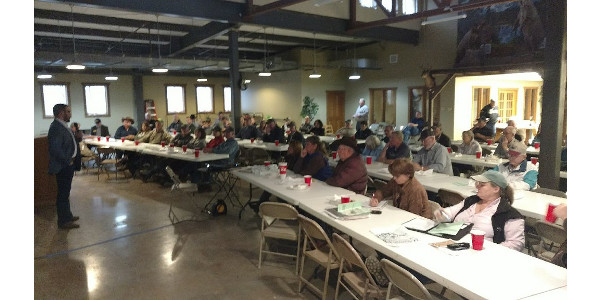 This year’s event drew a crowd of 90 local landowners that were interested in the agriculture topics addressed by the two featured speakers.

“Feeding through a drought is costly,” said Bailey. “To avoid that you have to identify and manage feed shortages before they occur.”

One of the ways of doing that is watching the weather and tracking rainfall. It is especially important to pay attention to some possible trigger dates during the year according to Bailey.

For example, winter precipitation will impact spring forage growth. Missouri typically gets 24 percent of its normal annual precipitation between November 1 and March 1. If that does not happen, then consider that the first warning that drought conditions may be coming.

There is typically a summer slump for precipitation. In Missouri, 30 percent of the annual precipitation happens between March 1 and June 1. If that mark is missed then farmers might need to consider early weaning of spring calves and selective culling of the fall herd.

Rainfall between June 1 and October 1 should be 37 percent of the annual precipitation, and if that is missed, the fall stockpile will be impacted.

“The key is to have a plan. Hay is an expensive forage when compared to cow-harvest pasture forage,” said Bailey. “The more steel and fuel you put between the sun and a cow’s mouth, the less profitable you will be.”

Both noted that hay production can be expensive. Part of that expense comes from waste. In fact, nearly 50 percent of the hay harvested using traditional methods does not end up in the cow.

But the other thing to consider is the quality of the hay.

“A high yielding hay crop does not always mean it was a successful hay crop,” said Schnakenberg. “Truth is, the practice of harvesting fescue hay rarely matches up with the climate of Missouri and too often has a low return on investment.”

That means it may be time for a paradigm shift. Producers should be considering the advantages of wrapped baleage, early harvest, and warm season forages.

“Converted a field does take time and money but having a warm-season forage gives options that most Ozarks producers don’t currently have,” said Schnakenberg. “For example, cattle can graze the fescue during the fall and spring and then hay and graze Bermudagrass during the summer.”

The evening also included updates from the Farm Services Agency and NRCS, and the Greene County Soil and Water Conservation District.

Formerly known as the Soils and Crops Conference, the conference name was changed three -years ago to better reflect the topics that best address farming in Greene County.

“This conference provides research-based information and options to area agriculture producers that can help them make more informed and profitable decisions,” said Tim Schnakenberg, agronomy specialist with University of Missouri Extension. “We are always open to topics of interest for our 96th annual evening next March.”

For more information, contact Schnakenberg in Stone County at (417) 357-6812 or Spencer in Christian County at (417) 581-3558. Copies of the presentations given at the conference can also be found online at the “agriculture” link at http://extension.missouri.edu/greene.

May grazing school to be held in Osceola