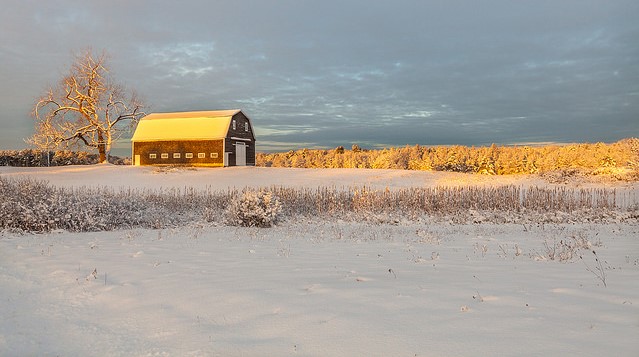 Perhaps our stray vortex is a bit jumpy, because in between the pipe-freezing, tree-popping cold snaps we get bizarre micro-melts, 50-degree days with rain. (Paul VanDerWerf, Flickr/Creative Commons)

CANTON, N.Y. — I’d love to explain exactly what a polar vortex is, but I’ll spare you the details. Mainly because I don’t know them. Apparently, the definition of a polar vortex has been changed by the American Meteorological Society three times in the last 20 years—even the experts are still trying to nail down what it is. Besides freaking cold, I mean.

If the phenomenon is not entirely understood, it follows logically that all explanations are flawed, which makes me more comfortable presenting mine. Some news reports make it sound like this is new or rare, but polar vortices (Arctic & Antarctic) have existed for millennia. Normally the Arctic vortex is a counter-clockwise swirl of icy air that stays between 6 and 30 miles above the Earth in the vicinity of the North Pole. It fluctuates in strength from one year to the next, and seldom strays out-of-bounds.

It takes a lot to mess up a vortex. Volcanic eruptions can fragment it for a year or two, and evidently, so can a warmer Arctic. To me the vortex is like having a bunch of Rottweilers a few blocks away which like to run endless laps around their yard. You want ’em to stay put, because if the fence fails, one could wander over to your place where it doesn’t belong.

What keeps the vortex in place are strong and persistent winds. To a large extent these winds are generated by the steep temperature gradient between mid-latitude temperatures, and those at the poles. The Arctic is warming about two times as fast as the global average, and the reduced temperature gradient has led to wimpier winds, not as good at keeping cold in its place. It’s like having a gap in the fence for those dogs. Diminished polar winds due to Arctic warming can let the biting cold vortex out of the yard, and it may split in 2 or 3 fragments that can drift to places they rarely if ever go.

In a nutshell (where I wish we could trap the thing), that’s an amateur take on the situation: we are vexed by half a misplaced polar vortex this winter. Of course there is more to the story; the jet stream is involved, and so are Russian spies. Well maybe not spies.

The fact that this massive high-pressure cold front (vortex chunk) is making us cold here does not mean planet-wide warming has stalled. That would be like visiting a lonely stretch of beach and claiming it proved no beaches are ever crowded. It’s good to remember the Continental US makes up less than 2% of the Earth’s surface (2.1% when you add Hawaii, Puerto Rico, Alaska, and sundry territories). We may be a world power, but we occupy a tiny sliver of our planet, much of which is wicked-hot right now. Australia, for example, is sweltering in the hottest summer ever recorded.

Perhaps our stray vortex is a bit jumpy, because in between the pipe-freezing, tree-popping cold snaps we get bizarre micro-melts, 50-degree days with rain. Such topsy-turvy weather can set us on edge, but can be worse for animals than a prolonged deep-freeze. The same deep snow which weakens deer by limiting food availability also hinders predator movement. When half the snow pack disappears in 24 hours, deer lose their protection before they can take advantage of increased browse. Freezing-rain events will encase pine, spruce and fir cones in ice, restricting food for resident songbirds. White ermine and snowshoe hares can suddenly find themselves out of sync with their surroundings.

And domestic animals suffer too. According to Dr. Kimberly Morrill, a Cornell University Regional Dairy Specialist, this up-and-down pattern can be particularly tough on calves. “We tend to see more cases of pneumonia,” she says. She also explained that even though a larger body mass means cows can better withstand rapid changes, temperature swings cause increased condensation in barns, which is a respiratory-illness risk. Farmers need to balance the need to continually ventilate barns while keeping them warm enough for animal comfort.

If there is disagreement about what constitutes a polar vortex, I’ll bet it is extra tricky to define a bipolar Arctic vortex. Here’s hoping it finds its way back home real soon.