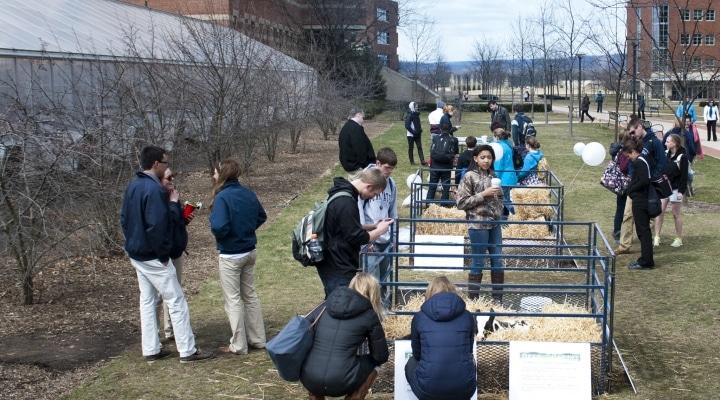 To qualify, the students had won the North East Student Affiliate (NESA) competition hosted by the University of New Hampshire in February.

It was a first-ever virtual competition presenting differences from past contests. Advisor Ben Williamson, Instructor of Animal Science, said, “Our students were resilient not only in preparing for the contest, but embracing the alternative platform. It is a great accomplishment, reflecting first on our students but secondly on our program.” It is the second championship for Penn State in the contest in four years.

Dr. Terry Etherton, Head of the Department of Animal Science said, “It is a great pleasure to congratulate our students for their outstanding performance in this new format. The quadrathlon is a rigorous academic challenge and the team’s national success is a wonderful tribute to all those who helped prepare them so successfully for this competition.”

The ASAS Academic Quadrathlon (AQ) is comprised of four components: Lab Practicum, Written Test, Group Presentation, and Quiz Bowl. Information and skill sets include the entire scope of animal science, from application, management, and basic science in food animals, dairy, meats, equine, and companion animals. The contest is a two-day event, and four team members must work together balancing their strengths to complete assigned tasks.

Williamson noted that students had to be creative in how they planned to work together and prepare for the contest. Working from different computers in various geographic locations required a greater intensity of focus to compete successfully in the virtual quadrathlon.

A significant aspect of the contest is the importance the ASAS board and AQ Committee puts on allowing all competing students to interact with each other and the board of directors. While the current situation limited those experiences, Williamson expressed his gratitude for the commitment to hold the event and to those who made it possible through extra coordination and creativity.