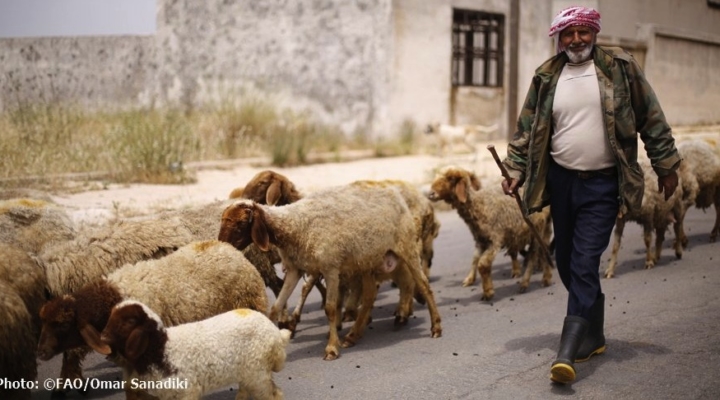 With funding from the United States Government, the three-month campaign has protected more than 1.3 million sheep and goats and 65,000 cattle from parasites and parasitic diseases in Syria. (FAO/Omar Sanadiki)

DAMASCUS — In strife-torn Syria, the food security and livelihoods situation of some 234,000 people has received a strong boost thanks to a recently completed animal health campaign led by the Food and Agriculture Organization of the United Nations (FAO) in collaboration with the Syria Veterinary Medical Association.

With funding from the United States Government, the three-month campaign has protected more than 1.3 million sheep and goats and 65,000 cattle from parasites and parasitic diseases in Syria.

Six years of conflict has undermined Syria’s veterinary services and a shortage of vaccines has increased the risk of infection in livestock upon which many people living in rural areas, but also those displaced by the fighting, depend as a source of food or income.

“Through this targeted animal health campaign, FAO is working to not only contain disease outbreaks in Syria but also prevent the spread of these diseases to other countries in the region,” said Adam Yao, Acting FAO Representative in Syria.

“As the response capacity of Syria’s veterinary services is facing serious challenges due to the ongoing crisis, the risk of transboundary animal diseases spreading rapidly and beyond borders remains a major concern for FAO. If no drastic measures are immediately taken the effects on livestock production and food security can be devastating,” he said.

Livestock production played a vital role in the Syrian economy before the crisis, contributing 40 percent of the total agricultural production and absorbing 20 percent of rural employment. Even during the current crisis, the sector still contributes substantially to the food security and nutrition of the rural population and is an important livelihood for women.

“Women now make up more than 60 percent of the agricultural workforce and are the backbone of Syria’s food supply, so this campaign has not only been life-saving for animals, but is helping to secure the livelihoods of many rural women, as livestock are often their only source of income to feed their families,” Yao added.

In addition to animal treatment, the campaign provided trainings to veterinarians on new techniques to control the spread of parasites – such as scrab, lice, ticks, tape and tube worms, Fascioliosis – and parasitic diseases such as Theileriosis and Babesiosis.

Livestock-dependent households were also informed about the different types of treatment and protection techniques.

Since 2011, FAO has provided treatment against parasites to more than 10 million of  livestock.

Texas leads US in foreign-bought farmland