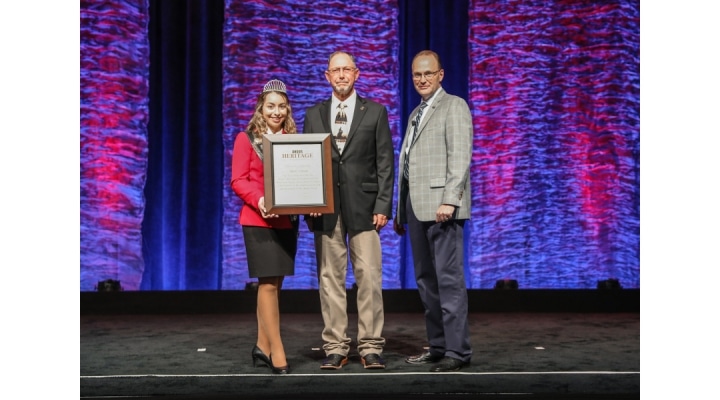 ST. JOSEPH, Mo. — The American Angus Association® celebrates innovators and visionaries by selecting individuals for induction into the Angus Heritage Foundation each year. Over the past 130 years, the Angus breed has established itself as an industry leader for quality and advancement. This reputation was built by innovators and visionaries who possess drive and wise decision-making skills to better the breed and the industry.

Those who know Bill Powell know him well, and those who may not, get to know him quickly. William “Bill” Powell Jr. and his wife, Gail, have operated Arrowhead Angus for many years in Thurmont, Maryland. Bill worked as a regional manager at the American Angus Association for 23 years where he provided service to thousands of members in his territory, which consisted of Connecticut, Delaware, Maine, Maryland, Massachusetts, New Hampshire, New Jersey, New York, Pennsylvania, Rhode Island, Vermont, Virginia and West Virginia.

He and Gail have been married for 33 years. They have been a true partnership in every sense of the word. Together, they own Arrowhead Farms in Thurmont where they have raised registered Angus cattle for 80 years. Gail was a strong force in keeping things going on the farm while Bill traveled for the Association.

Thirty-six years ago, with 35 cows, Brian McCulloh and Dan Borgen took a chance starting a performance-based Angus seedstock program with little idea of the outcome. Today, that chance paid off as Brian McCulloh and Woodhill Farms are being recognized as one of American Angus Association’s Heritage Award winners. Nestled in the rolling hills of Viroqua, Wisconsin, Woodhill Angus is known for a cow base that has been built carefully over the years by emphasizing selection for a combination of data and phenotype.

Woodhill Angus began in 1984, just about the time the American Angus Association rolled out the first set of expected progeny differences (EPDs). Since then, McCulloh has strategically selected balanced trait cattle, using the guidance of the data to build the Woodhill program to what it is today. GT Miss Traveler’s traits of calving ease, marbling and extra performance proved herself as one of the cornerstone females in the Woodhill operation. Today, Brian and his wife Lori manage Woodhill Angus and hold their annual bull sale once a year, since 1986.

In 1979, a large tornado hit Wichita Falls, Texas. While the tornado created destruction in the North Texas area, it created an opportunity for Steve and Ginger Olson. Following the tornado, Ginger’s family found a business opportunity in construction and were looking to disperse their Angus cow herd. Since purchasing the original Angus herd from Ginger’s family and with the help of Steve’s parents, Olson Land and Cattle Company has expanded their operation to become one of the leading seedstock and farming operations in West Texas.

Steve has been an active member in the Association since they joined in 1980, serving on the board of directors and as president in 2015. All three of their children served on the National Junior Angus Board of Directors and their two daughters both served as the Texas Angus Queen and Miss American Angus. The Olson family regularly hosts ranch tours, chefs and outsiders looking for more information on behalf of the Certified Angus Beef® brand.

Al and Vicky DeClerk, owners of Engelberg Angus Farm, met in Louisville, Kentucky, in 1993 and have been dedicated to the Angus breed and agriculture ever since. Al’s parents, A.C. and Hellen DeClerk bought their first few cows in 1943, and soon after, purchased their American Angus Association Lifetime Membership in 1945. Al and Vicky’s love for the Angus industry has been evident their entire lives. Standing six foot six, Al was an imposing presence, but honest and humble; people listened when he spoke. Vicky gained experience working as herdsman at a ranch in California prior to meeting Al. Later, he served as president of the Arkansas Angus Association, he was on the American Angus Assocation Board of Directors and he spearheaded the first Northeast Arkansas Angus Association Annual Sale.

Not only are inductees displayed in the halls of the American Angus Association headquarters, but a newly created website will soon house all of the Angus Heritage Foundation inductees, from 1983 to the present. To learn more and watch videos of the Heritage Foundation winners, please visit AngusAwards.com.

Over $1M available for cover crops in Sussex County, Del.

Proper management to reduce the incidence of grass tetany in your cattle operation
February 24, 2021